There are several games from the early days of the PlayStation that in an almost mesmerising way take me back to my youth. I used to skateboard for a couple of years as a snot-drenched youngster but was never very good at it and gave up after cracking my Hosoi board in a four-meter high vert ramp drop. When Tony Hawk's Pro Skater was first released, skateboarding was pretty much the last thing I cared about. But that changed, quickly. Almost overnight.

Tony Hawk's Pro Skater was released for PlayStation in September 1999 and became something of a cultural icon. Not only was the game itself well-executed with brilliant, easy-to-play/hard-to-master game mechanics and fantastic graphics, it was also crammed with real skateboard stars, contained a really good soundtrack and just the right atmosphere. At a time when skateboarding as a sport was on the decline, it was in many ways Neversoft's best-selling game that once again brought the skateboard into the spotlight.

Tony Hawk's Pro Skater 1 + 2 is, as the name suggests, a remake of the first two games in the series and it has been developed by the team that, among other things, gave us the Skylanders franchise (Vicarious Visions). The game system, all the tricks, the timing, and the controls are intact from the originals, as well as the music and the skaters. There are some tricks that have been borrowed from the third game in the series, such as the ability to wall ride and perform reverts but apart from that and the new Create-A-Park mode, these are two games that have been redone to be as faithful as humanly possible.

Due to this Tony Hawk's Pro Skater 1 + 2 feels more familiar than I had expected. It is very much like riding a bike, this game. If you learned button combinations and the system for stringing together long tricks - you never forget it (apparently). Compared to, for example, Skate or Skater XL (which was released a few months ago), the Tony Hawk games are more accessible and it suits me perfectly. This is as much about nailing the landings as it is about making sure to string the tricks together via manuals. Just like in the original games.

There are 12 stages in the first game and on each of these there are a number of challenges. These are all about collecting a certain amount of points, collecting letters to spell skate in stages, and performing certain specific tricks in spots around the course. The nostalgia I experienced when I dropped into that iconic, ultra-classic warehouse at the beginning of Tony Hawk's Pro Skater is almost unmistakable. The set-up with time-limited attempts to collect the same types of medals and letter may feel old-fashioned but is it's nice to see that Vicarious Visions has not chosen to modernise anything here. It just works.

The difficulty level in both Tony Hawk's Pro Skater and Tony Hawk's Pro may not be too extreme but it is helped by the fact that you can create your own skater and skatepark. The music is also as good as it was in 1999, with additions to the classic soundtrack from artists, such as Machine Gun Kelly and Billy Talent. Tony Hawk's calm, familiar voice works perfectly as a mentor during the first game's well-executed tutorial and the variation in stages works just as well today as it did 21 years ago.

The graphics do not impress, though. As I said, Vicarious Visions has recreated every little pixel from scratch and even though they have managed to capture the aesthetics very well, this is, technically speaking, one of the ugliest games released so far this year. It can occasionally look like a PS3 game and even though the overall frame rate is impeccable and the animations are good, it's a shame that Vicarious Visions did polish up the lighting and the textures some more.

Apart from the ugly graphics, however, Tony Hawk's Pro Skater 1 + 2 is good. It may not be great, or anything crazy, especially not compared to many of the best remakes that have graced us over the past two years, but as a sports game, it is balanced, easily accessible, and fun.

REVIEW. Written by Petter Hegevall on the 3rd of September 2020 at 15

Those who bought the game physically on Xbox One will need to buy another copy on Xbox Series.

But most of us will have to pay for the upgrade.

Tony Hawk's Pro Skater 1 & 2 to get Crash Bandicoot 4: It's About Time crossover

The update will also bring The Birdman Pack, where all proceeds go to building public skateparks across America.

YouTuber Scramblez is credited with this impressive creation.

It turns out Activision has another smash hit remake on its hands. 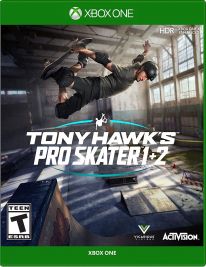