In Tokyo Mirage Sessions #FE we play as Itsuki Aoi, a young man who gets caught up in a mysterious incident that is caused by magical beings that hail from another dimension. Shortly after the trouble begins he gains control of a so-called Mirage, which in turn leads him to Maiko Shimazaki, who is disguised as a talent scout and who makes us the leader of her anti-Mirage task force. This strange turn of events, of course, has a catch because for camouflage, we need to get into the show business and take Japan's entertainment industry by storm.

This is the run-of-the-mill start of Tokyo Mirage Sessions #FE, which originally came out for the Wii U back in 2015. The game is the result of a collaboration between Atlus and the developer of the Fire Emblem series, Intelligent Systems. Nintendo wanted a crossover between the two and a Personaesque role-playing game set in modern Japan was what emerged from the duet. Four years later, the expanded Encore version is available on the Nintendo Switch, giving new players the opportunity to experience this overlooked JRPG on a more popular platform.

What makes Tokyo Mirage stand out is its take on the media landscape in Japan. As mentioned earlier, over the course of the game we experience the rise of a young group of performers who are working together in show business. These youngsters are going to be idols, actors and the like, but in order for them to climb the ladder of success, they need to develop certain skills. We do this by getting quests in the real world and then completing them in otherworldly dungeon crawls, which in turn levels up our performance skills and makes us more capable in combat. In the main questline, we experience just how much passion and attention directors, photographers, and hosts put into the little details of their work, while the side stories address some of the different worries or troubles that people in show business might encounter as part of their jobs.

Our growing showbiz skills impact on the action-heavier parts of the game, which is linked to the Fire Emblem franchise, with similar-looking enemy designs and weapons. Enemy Mirages regularly invade our world in order to steal people's will to live but since these beings cannot survive in our world, we end up fighting them in dimensional rifts, so-called Idolospheres. In these turn-based battles, we work to attack the weaknesses of our enemies, because by doing so (following in the style of the Shin Megami Tensei series) we are able to perform critical follow-up attacks, called a 'session'.

We earn various weapon components and money from these battles, and this is mostly used to buy consumables to refresh our party during the extensive dungeons. From our base of operations, we can make use of the materials we've gathered and fuse magical weapons that then give us different abilities. Using these weapons we can strengthen our party across three main categories; combat commands, passive skills, and the abilities needed for the various session attacks. In addition to this, there are also powerful coop abilities that require two party members to attack at once.

The connection between the extensive character growth and the story progression results in a solid gameplay loop with a number of features and mechanics keeping us coming back for more. Unfortunately, though, you can already tell that Tokyo Mirage has a few years behind it, and that's got nothing to do with the ingenuity of the concept. The switch version of the game benefits from the stronger hardware, which means technical improvements including shorter load times and slick Full HD resolution. In fact, the action looks smooth on the hybrid's small touch screen, even if Tokyo Mirage Sessions #FE was never a stunning game to begin with (despite some bold costume design, we should add).

Compared to the original version, more content has snuck into the re-release. The former DLC-exclusive bonus dungeons that are used for farming resources are part of the overall package now and this greatly reduces the grind required to finish the later chapters. In addition, there is a three-part side story with its own area to explore. Although this addition is kind of small, it does fit very nicely into the events of the base game, narrative-wise. New skins and further support attacks complete the package with characters like Tiki, Barry and Maiko helping us out with their passive session attacks during combat.

Tokyo Mirage sure had some exciting ideas and overall it feels distinct from the other works by Atlus, even if there's a fair number of nods to other titles by the developer. For fans of these different series, this is quite the fireworks display, although we still had some difficulty figuring out the fascination that some people have with the game. That said, there are very few examples of this type of RPG experience available on the hybrid console, so while we wait for Shin Megami Tensei V, you should definitely consider checking this one out. That is, after all, what second chances are for, right?

Advertisements
Gamereactor UK
+
It has its own visual identity, coherent songs, close-mesh of story and gameplay, insight into the life of young celebrities, a lot of fan service, loading times have been reduced.
-
Division between main and secondary quests is too obvious, old-fashioned dungeon design, innovations are somewhat limited.
is our network score. What's yours? The network score is the average of every country's score

The covers cost 50 Platinum Points on My Nintendo, and are only redeemable for US account holders. 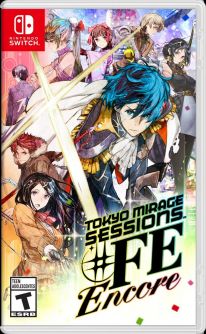