Tokyo Mirage Sessions #FE is an RPG from 2015 that was created as part of a collaboration between Nintendo and Atlus for the Wii U. Because the platform wasn't exactly successful, the audience for this niche title was somewhat limited, however, existing fans still remember it fondly. For us, that was reason enough to take a closer look and slip into the shoes of a rising star of the stage.

The premise of Tokyo Mirage Sessions #FE Encore, the Switch-bound re-run that's getting a second chance when it launches on the hybrid console next week, has us take on the role of a young man called Itsuki. He's a simple performer whose most striking feature is that he doesn't seem to notice the constant advances coming from the female cast around him. However, one day Itsuki finds himself in a strange parallel world where he must learn how to control magical creatures called Mirages and saves his friends. These events are enough to turn him into a hero and leader, although he's a leader who can't seem to say no to helping out despite the fact that he doesn't seem to relish the role at all.

Tokyo Mirage has many things in common with the Shin Megami Tensei series, in particular, its turn-based combat system. With a growing repertoire of skills, we have to target the weaknesses of our enemies, which in turn helps our companions to link their attacks - as long as they have the necessary talents for it. Our goal while fighting off enemy Mirages is to chain together as many passive attacks as possible in order to increase the damage we inflict, while also getting additional benefits such as weapon components and extra cash.

Even after 20 hours we still haven't quite figured out how the damage is calculated, but the level scaling seems to do most of the work. Toyko Mirage Sessions #FE Encore includes some mechanics that shorten the genre-typical grind through the levels and other types of character progression, mechanics which were additional, paid content previously in the Wii U original. What Atlus does well is carry over the progress of our units into the social component of the game and vice versa. In most of the side quests, Itsuki supports his friends so they can discover a new side to themselves, which, in turn, unlocks new fighting potential.

These additional traits are charmingly squeezed into the narrative framework that gives Tokyo Mirage its unique style. As mentioned earlier, our group consists of newcomers and career changers working in show business and that's why our daily chores revolve around gigs of various sizes, interviews, concerts, and even photoshoots. This premise permeates through the entire game and is even apparent in the combat animations and the equipment carried by the characters. So yes, if Japanese pop idol culture isn't your thing, you should probably avoid this encore show.

The new edition for the Switch offers some fresh content, but it is not that sizable. Of particular interest are the so-called EX dungeons, which we can enter and explore within the Bloom Palace (a place you often visit for character progression). These are relatively unspectacular, interconnected labyrinths, although we experienced several short stories in them as well, stories which are aligned with the events of the main game. We also found some helpful items, skills and additional skins, and using them we can visually tweak our party members as you might in other titles from Nintendo and Atlus. The academy outfit from Fire Emblem: Three Houses is included, for example. They're not major additions, but we're glad they're in there.

We haven't found any noteworthy problems with the Switch port, but there are a few design decisions that seem strange and make the game feel old-fashioned. For example, very powerful opponents appear in the dungeons from time to time and since they are several levels above us, it's difficult to defeat them. If you don't flee in time, there is relatively little chance of victory and death sends us straight back to the title screen, where we have to load the last manual save file. In a JRPG, such a loss can be devastating, so you should save as often as possible.

Tokyo Mirage Sessions #FE Encore seems to be the kind of game that is best be played on the second screen, which makes it a perfect fit for the Switch Lite if you ask us, and since dungeons were not designed to be particularly complex, the game shines when played in handheld mode. What works well on larger screens, however, are the phenomenally well-made anime sequences that transform us into real stars and offer some fantastic scenes to complement the action. Together with the over-the-top Japanese pop songs, there is a harmonious mix that'll either convince you with its "Kill 'em with kindness" attitude or makes your ears bleed.

Although the overarching theme isn't our cup of tea, we're still enjoying playing Tokyo Mirage on the Switch. While neither the story nor the gameplay seems particularly outstanding at this point (we can only talk about the first half of the game in this preview), Atlus has once again created a wonderful and charming world full of detail and warmth. The RPG starts off slow and steady, but the initially generic characters are slowly building up momentum and we are excited to see how this show will turn out after the interval.

The covers cost 50 Platinum Points on My Nintendo, and are only redeemable for US account holders. 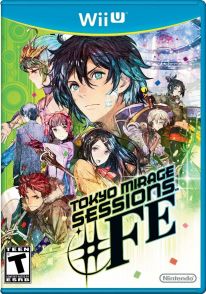