You are Jack Cooper, a Frontier Militia rifleman who aspires to become one of the highly regarded Titan pilots. For now you'll have to do with fighting side-by-side with the giant Titans and their pilots. Or that was at least the original plan. Your entire team gets slaughtered during the first mission of the game, and you're now trapped behind enemy lines with no human assistance. Fortunately there's still one Titan left intact, and its original pilot transferred his control over to you with his last breath. Now it's up to you and your Vanguard Titan to finish the mission.

A fairly simple concept, but not exactly surprising when the story is written by Jesse Stern, Steve Fukuda and Todd Alderman with input from the rest of the team who wrote Call of Duty 4: Modern Warfare and Call of Duty: Modern Warfare 2. Alderman couldn't help but laugh when we asked if this meant that we'll see the death of a major character in Titanfall 2, but also said that they've learned some new tricks since then. One of which is humour.

During the presentation it was obvious that Respawn wants to mix up the experience by having lighter moments that make you laugh. While traversing a factory area the player stole a weapon from a robot, and the smiley on its chest turned into a sad face. Another example is one of the game's antagonists, the Austrian-accented commander Richter, who sounded just like Arnold Schwarzenegger, and even shouted the famous "Get down!" line. Hopefully this humour will be spread nicely across the game, and not ruin the pace of the experience.

The main idea of the single-player campaign is to mix the fast-paced action from the multiplayer with an intriguing storyline. When Respawn started working on the single-player story they had to figure out what the core principles of the game are. Titans, fast-paced combat and pilot mobility was the answer.

"This was quite a challenge for our level designers," Steve Fukuda, the game's director, told us during our interview. "As you'll be fighting in or side-by-side with your Titan for most of the game, we had to design levels that give players room to try out different approaches. It's far from open-world, but once in a while we'll give you more freedom as how to handle different scenarios."

During the presentation we saw multiple examples of this. Fighting inside a factory with multiple storeys that made for some quite impressive wall-running and acrobatics. Other examples were large, lush jungles where the outskirts was made out of tall cliffs that you could traverse while your Titan fought in the centre, and urban environments filled with buildings that could either be used to jump between, take cover in or gain higher ground.

By entering your Titan you get more firepower, but by splitting up you have yourself a nice diversion and a chance to get up close and personal. Your pilot has different kinds of abilities that comes in handy when fighting outside your Titan. Drew McCoy, the game's producer, really liked using the cloak ability during our presentation. This way he sneaked up on enemies, taking them out with a single button press that threw them to ground and stabbed a knife in their face. The first they showed this brutal attack we heard a mix of a few "jeez, that's nasty" and few cheers from the audience, but watching this same attack over and over again got tedious. After playing around with Doom's attacks earlier this year we hope the close quarters attacks are more varied in the final version.

Fortunately Titanfall 2 is all about trying out different approaches and utilising your pilot's mobility in the best way possible. When not sneaking around, McCoy double-jumped and wall-ran all over the place, quickly eliminating every enemy in sight. At the same time his Vanguard Titan was wreaking havoc on other enemies. The Vanguard can swap class on the fly, and unlike multiplayer (that only has six classes) you can choose from what seemed to be eight or nine different classes here. Apparently Respawn didn't expect us to notice that small detail, so when we asked for more details about it they could only confirm that we'll get to choose from multiple classes in the single-player campaign. Some of the classes appeared to be blocked, so maybe we have to unlock them by defeating the bosses in the game.

If you're familiar with the introductions of the characters in the Borderlands series you know just what to expect from these boss fights. Commander Richter came blasting in with his Titan (which seemed to be a Ronin class), got out to say a cheesy line as a the camera zoomed in and smashed his name on the screen. In terms of the combat aspect of the boss fight, McCoy first chose to fight Titan versus Titan before getting out to eliminate the incoming minions. We got the impression that each boss fight will put you up against different kinds of Titans that each require different approaches.

Titanfall 2's campaign isn't all out action. We saw a few glimpses of environmental puzzles where the player had to time their jumps perfectly or shoot far away button panels with a type of electrified gun so they could open doors. These seemed mostly simplistic, and even mid-game sections had ghostlike figures showing us exactly how to solve them. It would be fun to figure out these for ourselves, so we hope that the "hints" are optional. The way they function now does little in terms of actually varying the gameplay in a significant way.

All in all we're left with a positive impression. This is clearly made by much of the same team who gave us games like Call of Duty 4: Modern Warfare and Call of Duty: Modern Warfare 2. The story seems to be filled with good old popcorn action, while the level design gives some room for playing around with your abilities. Respawn say that they want to explore the relationship between a pilot and his/her Titan, and we got a few glimpse of that. It'll be interesting to see if they can merge the good gameplay with a compelling story, and we'll find out when we get our hands on the final version. Many fear that Titanfall 2 will suffer due to the tough competition this fall, but if they deliver more of what we got to see in Los Angeles then we're sure these Titans will put up a good fight on October 28. 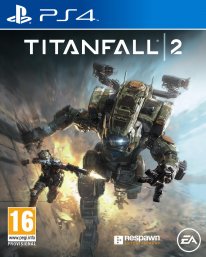