Pillars of Eternity 2: Deadfire, the tropical themed sequel to the more forested original game is on the horizon, and we grabbed a quick chat with systems designer Nick Carver and associate producer Alec Frey at E3 to learn more about the game, including the world and the companions you can come across.

"Now we're bringing it to a really tropical, kind of almost pirate themed Caribbean type of thing," explained Frey. "We're really excited about that, as for pacing, we've kind of tried to take control of like combat and really make sure the combat feels intense and that choices really matter in them, and maybe even take a few steps to make sure that every choice that you do in combat feels good and make sure that all of our encounters are really well placed, really well set, and really feel good to interact with."

Carver went on to add that even though it's a new environment, three companions from the original game will make a return: "Everyone's favourite Edér, as well as the wizard Aloth, and Pallegina from the Vailian Trading Company. And new companions have been added that haven't been seen before, such as Maya Rua, Kana Rua's sister from the previous game."

Who was your favourite companion from Pillars of Eternity? Let us know in the comments.

Pillars of Eternity 2: Deadfire on Console

"It may be a bit rough getting started, but the quality of the storytelling and the nuanced characters make it worth sticking with."

"Obsidian has implemented (almost) all of the improvements fans have asked for, and the whole package is incredibly strong."

Pillars of Eternity 2 finally being released on PS4/Xbox One

The beloved sequel for Obsidian's classic RPG will land on January 28, along with an Ultimate Collector's Edition

Pillars of Eternity needs to "re-examine the entire format"

Pillars of Eternity 2: Deadfire "meant to be the same great world fans expect" on consoles

We spoke with Lance James from Versus Evil about the challenges of porting the title to consoles.

Pillars of Eternity II gets turn-based mode as free update

Tomorrow we'll get the chance to play the game in a totally different way, following on from the launch in May last year.

The Forgotten Sanctum announced for Pillars of Eternity 2

First information about Update 4.0 is available, too.

The Banner Saga and Pillars of Eternity 2 among the titles discounted. 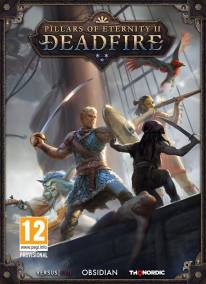