Black Mirror isn't just a surreal TV series, but there's also an old point-and-click adventure created and released in 2003 by Future Games with (almost) the same name, The Black Mirror. King Art Games (The Book of Unwritten Tales, The Dwarves) created the sequel Black Mirror II in 2009 and is now in charge of a reboot to the series, with THQ Nordic as producer and publisher.

The new Black Mirror is a Gothic horror adventure that "both retains the strengths of the original games and gives us more room to explore fresh possibilities in terms of gameplay", according to Martin Kreuch, Producer at THQ Nordic. He promises free and direct exploration, but also some old point-and-click style as well.

The story revolves again around the Gordon family and the Black Mirror manor house, but this time we're taken to Scotland in 1926, not England in the '80s. Dark secrets and insanity are the main topics of the plot that the player will unveil walking with David Gordon, introduced in this trailer.

Black Mirror will be released on November 28, 2017, on PC, PlayStation 4, and Xbox One. Do you remember the first game?

"Together the audio and visuals will make you feel alone and unsafe, making it feel as if there's danger lurking in every corner."

We're checking out the reboot in today's spooky stream.

We talked to producer Martin Kreuch about rebooting the franchise.

A reboot is being released later this year. 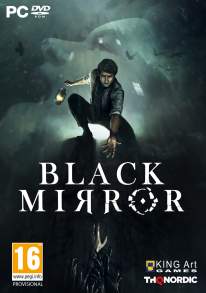