THQ Nordic has a lot of properties and brands already under their umbrella, and now they've announced that they've acquired developer Piranha Bytes and all their assets, including the Gothic, Risen, and Elex titles.

The purchase price hasn't been disclosed, but it equates to "three years of what management's estimated royalty payments to Piranha for upcoming titles would have been, if the acquisition had not occurred."

"Piranha Bytes is one of the most iconic German game studios and the creators of RPG's Gothic, Risen and, more recently, Elex. The three strong IPs have proven successful and will be great additions to our portfolio. We look forward bringing Piranha team into the family which has received legendary status across the RPG community as their fanbase cherishes their current games and eagerly anticipates their new titles in the future", says Lars Wingefors, Group-CEO of THQ Nordic AB.

THQ Nordic and Koch Media has an existing relationship with the studio, acting as publisher for several of their games, but Piranha Bytes will remain an independent game studio going forward. THQ Nordic will act as publisher and distributor, while also offering support and marketing, and CEO Michael Rüve and Head of Games Björn Pankratz will stay in their roles.

"We have a successful and long-standing relationship with THQ Nordic and are very excited to join the group. THQ Nordic has unparalleled experience and capabilities in games development and publishing, and we are convinced they are the perfect partner to support Piranha in taking the studio to the next level. We see a unique opportunity to continue to develop great, memorable and impactful RPG games, now being part of the THQ Nordic family", says Rüve.

Are you a fan of Piranha Bytes' games?

The studio is responsible for the likes of Elex, Gothic, and Risen, and now THQ Nordic is coming on board to extend their existing relationship.

Risen 3 and its voyage onto PlayStation 4

We talk to Piranha Bytes about the incoming Enhanced Edition.

Yet another HD re-issue set to arrive in August.

"Dark knights from a culture steeped in legend" if we are to believe the press release.

Piranha Bytes action-RPG set to land during Gamescom in August. 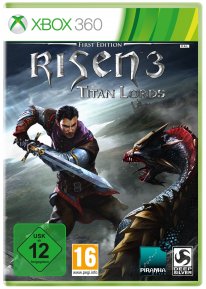