It's shortly after 1pm, there's a knock at the door. Suddenly a cruel silence descends over this place of refuge. No one dares make a sound. Everyone stares at the ground. The silence is interrupted by another knock. Someone's at the door, and whoever it is, he does not stop knock knock knocking. Katia goes up and looks through the keyhole. There is an old man. Suddenly he begins to speak, somehow he must have sensed the movement on the other side of the door. But since no-one answers, he knocks again. We can't pull down the handle, otherwise we might open the door to danger. What if this unassuming old man is the vanguard of a bandit gang intending to robs us. Maybe even kill us? All we have to do is open the door, and then we'll know for sure.

This War Of Mine is very dark, gritty and hard to describe. The adventure takes place in a theatre of war that rages directly on our doorstep. Snipers hide on the rooftops and shoot everything that moves. We can only venture out at night looking for supplies, but even cloaked in darkness it can be dangerous. At its core the game is about the moral choices we must make in order to secure the survival of our community.

We control a group of survivors, and each has their own uses and abilities. Katia, for example, was, once upon a time, a reporter. Pavel was a rising star, a local football player, and he can run very quickly if the need should arise. Our third character, Bruno, had his own cooking show on TV. He can conjure up the tastiest dishes from all sorts of ingredients.

But those characters are not who they were, and those days are long ago; now everything is different. The war broke out and robbed these characters of all the things that they thought worth living for. These survivors live in a broken building and do all they can to simply endure, surrounded by filth and piles of rubbish, cohabiting with rats. Windows and doors are barricaded, and not without reason. Some floors are completely destroyed and are no longer accessible via the 2D perspective that houses the game, although we do get a good overview of our home. It's not a nice place to live. The overall presentation is bleak. Depressing. Together with its well-measured score, This War Of Mine is layered with a thick dystopian atmosphere.

Later we are in a different house with just one of our survivors, and we're looking through another keyhole, this time peeking into a kitchen. We can almost hear the growling in Bruno's belly, but we must be patient. We know that there's something to eat in the kitchen; a woman is looking for something, so I'm hiding in a doorway. After what feels like an eternity the woman leaves the room. We immediately rush to the fridge raid it for supplies and quickly depart, our backpack bursting at the seams. Our household will survive at least one more day, but on the way home we're attacked, luckily only by guilt. Had we really sunk so low? What will happen to the people we just stole from? One bite of a withered apple and we're quick to forget.

During our time in This War Of Mine we're constantly faced with similarly overwhelming decisions. We're forced to evaluate the different needs of our group and balance them against the abilities of our characters, using their strengths to extract as much as we can in a world dominated by poverty. There is never enough, and what you do find is always used too quickly. In the beginning it's entirely possible to meet the basic needs of the survivors, but later there's more to it. People get used to the hunger, they know that they will die. They listen to the radio, play guitar, read books, or sit once a week in front of a warm heater. We long for the old days, but they will never come back.

There's a lot of resource management in This War Of Mine. It's important to keep an eye on food levels, medical supplies and building materials, because these things are always, always in short supply. At first we rummage through our own rundown facilities for food, water, or other useful items. However, it quickly becomes clear that this area won't yield enough materials to sustain us, and therefore we must go on night raids and plunder other houses. However, a raid must be well planned.

It's when a character is crouched and slowly sneaking through a building, that This War Of Mine is at its most intense. We must pay special attention to the visual clues that point to a possible source of noise. We must also remember that fellow survivors will see or hear us if we move carelessly. If the residents are startled, they'll look for the intruder and defend their belongings, with lethal force if required. In moments such as this it's nearly always best to turn and run, otherwise it's unlikely you'll make it home alive. And if a character fails to return from their mission, the rest of the group will be left starving and fewer in number. Death in this war is permanent.

While one character is out looking for supplies, the others must watch the house and defend against possible enemies. A third (or fourth should someone join your group) character can rest, sleeping during the night while another guards against anyone doing exactly what you yourself are doing elsewhere in the city. We control each of the characters separately, and it doesn't take long before they become a well-oiled machine, rotating between action and rest. Our house is quickly cleared of rubble, and then we go about the process of equipping it with items made from the materials that we find during our travels. We build two beds, a stove for cooking and a heater for the cold winter, while a radio gives us news from the outside world. These things can be upgraded, and new items can be crafted during the daylight hours.

Those who look behind the war-torn setting and the struggle for survival, will find what appears to be a solid hybrid of strategy elements. This is a game where careful inventory management is key to survival, and this is balanced against tactical depth, slow passages of play as we craft during the day and wait for the raid that is required every night. We've played through to near the demo's end and, strangely, there's no save feature. Perhaps that's just the case in the build we played, and there'll be a save option in the full game, maybe not. If not then it's a device that, while effective no doubt, will have an impact on the way people play, and it might prove frustrating for those with less time spare.

And so we approach the end of our time with the demo. The man from the beginning of this text is still knocking on the door. We let him in. For two solid hours of game-time we stared, transfixed, watching the front door, not knowing what to do. Two hours of his incessant knocking. Did he bring with him a party of raiders and kill our survivors? Was he a trader looking to swap some materials? No, he just wanted a warm place to stop, a roof over his head, and some company. When we finally succumbed and opened the door, we weren't thinking about what would happen to Katia, Bruno or Pavel. We were thinking about ourselves, asking whether, if we were in their shoes, we would open the door or not. Would we risk our safety? Now we're not so sure.

Thank you for your time. We will take care of this matter as soon as posible
This certainly looks like it will be a deep and interesting game for those who want something a bit different. In many war games, you never see a single civilian, unless it's meant to drive the plot forward.
Gameplay > graphics 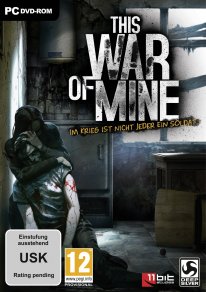