"What is Thief?" I ask. The reply: "Thief is the stealth genre, come full circle." The answer hangs ominous in the damp darkness of Copenhagen's Cisternerne - a museum built in underground cisterns. The dungeon-like surroundings could very well have been taken from Eidos Montreal's Thief reboot. Demo stations have been lined up in the cellar and after a brief presentation and introduction, it's time for Garrett to awaken from his long slumber and get back to his thieving ways.

And he has slept for quite some time. The Thief series, that once helped define and evolve what we today know as the stealth genre, has been in cold storage since 2004 (Thief: Deadly Shadows). Eidos Montreal, the studio who recently rebooted Deus Ex with the ambitious and well designed Human Revolution, seems like the perfect studio to bring Garrett back to life. The idea being that the new generation of hardware is key to bringing back to grandfather of the stealth genre. The game retains the first person view, but much like in Deus Ex: Human Revolution there are small instances of third person perspective to give the player a good overview. Garrett has been given a much larger arsenal of weapons and gadgets, making stealth and infiltration more fun and exciting than ever. But it's not the gadgets or weapons that first catch my attention.

The first thing that strikes me is the city itself. The dark, medieval and depressing metropolis is almost a character of its own. Smoke rises from the many chimneys towards the dark heavens that are lit only by the full moon. A gigantic clock tower looms over the dark houses. It's almost like it watches over everything that happens below. We're given a brief introduction to the story, but we'd rather not delve too deeply into that as you'll get to experience that on your own in good time. Instead we take on one of the sandbox levels, The Stonemarket. We sneak in and out of shadows without any issues, we pick open a window and are introduced to the biggest temptation in Thief - cold hard cash. All the valuables that Garrett steals are converted to golden coins that in turn can be used to upgrade your gear. Everything from golden busts to silver candelabra, but these trivial items aren't worth our time. We're after something else. This place belongs to Old Willy - member of the nobility who has recently fallen into debt - and our job is to relieve him of his last truly valuable possession - a golden watch.

We make our way around the place. Nobody is there. We can hear the guards oustide and there isn't much time. We make use of Garrett's sixth sense (Focus) that reveals a secret mechanism behind an old painting. A button is pressed and a ladder to a secret room in the attic is revealed. The watch is up there, but the guards hear the noise the ladder made, and we jump out the window. A ledge catches our eyes and we pull out a hook from our cloak, swing around up onto the dark rooftops and hurry off into the distance. This is just one small side missions and there are plenty more in the sandbox levels of Thief. While it didn't last long it illustrates the precise controls and striking atmosphere of the game. You're in complete control of Garrett's pace, and the controls come across as tight and well designed regardless of whether you're making your way across dark rooftops or you're engaged in open combat with guards. By holding down L2 Garretts enters free-running mode, meaning he will automatically climb up and jump over obstacles in true Assassin's Creed fashion. It's simple, intuitive, and entertaining.

And you're going to want to take the scenic tour as Thief looks stunning on PlayStation 4. From a technical standpoint there are no complaints. A solid and high framerate made it enjoyable to sneak around. But Thief is still one of those games locked in between generations, and compromises have been in the visual design to accommodate lesser consoles. That said, the visual concept of Thief is strong enough for us to ignore slight annoyances brought on by the facial animations. The visuals are accompanied by an eminent ambient soundscape. Not only does it make for great atmosphere, but it also serves a purpose as it warns Garrett of incoming dangers.

We're given our next mission by Basso. He hands you side missions, and his place of business (the Crippled Burrick) serves as one of Garrett's safe houses. He wants me to steal the ring of a high-ranking cleric. The only problem is that the owner of the ring is dead and on his way to the crematorium. We make our way to the crematorium unseen, and once there we use loosely hanging pipe to gain access to the facilities. We make our way past unknowing guards below and open up one of the top windows. The crematorium looks more like a slaughterhouse than anything else. Bodies hang from hooks that are used to transport bodies from one end of the building to the other. A quick route across? We grab hold of an empty hook.

Still unseen we arrive in the room where the guards separate the valuables from the dead prior to burning their bodies. The cleric lies there, but without his ring. Enter one of the Baron's generals. He looks at the cleric's fingers, but sees nothing. He then pulls out the sword of the soldier closest to him cuts open the belly of the cleric and finds the ring in his stomach. He disappears into his office. An elegant jump, a blown out candle and a knocked out guard later and we find ourselves inside the office. We work the safe and grab the ring, but as we turn around the general, who has a knack for catching thieves, stares at us. We kicked him in the chest, place a chair in front of the door and make our way out through a ventilation shaft.

As the mission concludes we're treated to a screen that lists our accomplishments, something you'll see after each chapter of Thief's main story. These results are aimed to provide us with replay value as you're given a score based on your playstyle. Your score is then uploaded to leaderboards so you'll be able to see who's the best Ghost, Opportunist, and Predator. Ghost, is all about stealth and remaining undetected. Opportunist is for those who prefer to take out enemies through non-lethal means, while Predator is the option for those with a violent streak and no sympathy for the Baron's guards. On top of this your given extra points for completing a chapter with a series of more challenges add-ons. Want to make it harder by not having accurate aiming with your bow? Or how about only being able to knock out guards from behind? These customisation options and more are available for players in order to maximise their score.

This is quite closely inspired by Splinter Cell: Blacklist, much like the city takes inspiration from Dishonored, and the button that let's your free run is straight out of Assassin's Creed. But it doesn't matter. Thief feels like the stealth genre reborn - the return of an old master that has handpicked the best traits from other stealth titles. We were massively impressed by the time we spent with Garrett. It manages to be old school, while also packing the best advancements made in the genre of the last few years. And while the line about coming full circle could have been taken straight out of a press release it actually rings true. Whether it's a perfect circle remains to be seen. 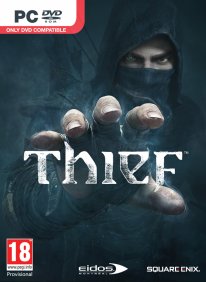