They Are Billions recently left early access on PC and now it has made its way to consoles too. This steampunk real-time strategy title is set in a post-apocalyptic world swarming with zombies, and Numantian's game tasks you with building a colony to protect your survivors against the hordes of the undead, while also carefully balancing resources and expanding your domain. What's not to love about that premise?

Fundamentally we're looking at a base builder that seems to rely hugely on tower defence. For anyone who's a fan of the old Warcraft or Command & Conquer games, you will feel right at home. You start off with a command centre, a few troops, and some resources. From there, you set up your base and expand. Wood and gold are the first needs. Gold generates in your HQ while you build sawmills to collect wood. Before long you need to build houses for new workers, structures like farms to collect food, quarries for stone, and so on. While you balance your resources in the name of expansion, you must also be aware of the undead wandering in and infecting your survivors. The first few stragglers can be picked off by your troops, but before long you'll be overrun by swarms.

Building walls, towers and a barracks to defend your base as soon as you can is key, and aside from building resources, you have to think about workers. Naturally, more houses require more space, however, expanding your settlement on one side can leave you more vulnerable on another flank, especially when the bigger swarms pop up with little in the way of warning. Balancing resource management and making sure to not expand beyond your limits adds a huge tactical element to the experience that we really enjoyed. In fact, we found ourselves playing, losing, and then coming back for more over and over again.

The console version offers Weekly Challenge and there's a Survival mode. The Weekly Challenge allows you to take on a map only once, and post your score to a leaderboard. Survival mode, on the other hand, is where we spent most of our time. When you first play, there is only one map option, but you can unlock more through playing. The maps are all randomly generated which makes each playthrough a new experience. You must build, survive small swarms of zombies, and expand before a super horde comes along to wipe you out. Before you start, you set the parameters for your game, such as how long you have before the horde arrives. The problem is that even on the easiest setting, the game is really challenging.

While the challenge was welcome, it still seemed a little too brutal at times. One minute you feel like you're sitting pretty, then the next, the zombies, which are a combination of walkers and runners, are through a wall, in your base, and the infection is spreading like wildfire. One mistake and it's game over. While we can see the appeal to more hardcore fans of the genre, the difficulty did strip some of the fun away at times, and for the casual gamer, it might be a huge problem when one mistake is punished so brutally.

The other major problem we noticed, aside from the difficulty, was the on-screen text. We were playing on a 48-inch TV at a distance of 1.5m, with pretty decent eyesight we might add, and we found the text on the screen difficult to read. It feels way too small and we found ourselves leaning in to see the screen and try to read what was there. We can accept the difficulty spikes, but this issue reminded us that we were playing a game originally intended for PC. The controls also felt awkward at times, and it would clearly be better played with a mouse and keyboard (there is support for this on PS4, it should be noted).

This is a game you really have to learn from experience, as there is no tutorial. That being the case, we felt a little confused on our first playthrough. After a while, it does all become intuitive, but a little guidance early on would have been welcomed. For example, there is a building that helps you research new technology, but we missed it on the first play. A narrator or companion much like the one in Trópico could have really helped us.

It would have also been nice to have a story or campaign mode to give They Are Billions a bit more lasting appeal (there is such a mode in the PC version of the game that launched last month, but it hasn't made it over to console). There was also a lack of characters other than the occasional new mayor who gives you a bonus when you reach a population milestone. That being the case, we found ourselves not really caring about the people in our colony.

The graphics look great for a top-down RTS, with a drab colour scheme that puts you in the zombie apocalypse mood. The buildings all look typically steampunk and visually we enjoyed the experience. That said, the menus could have been improved in terms of size and visual quality as, much like our comments about the in-game text, the pictures were a little small. We would have preferred an expanding and shrinking options menu. We were frustrated a few times after we built the wrong building or researched the wrong technology. Once more, it probably would not have been an issue on a close-up PC experience.

The background music set the tone well, and most of the sound effects really built on the graphical experience. That said, when your villagers are in distress they make a cry for help. In our plays, we saw them quite often get stuck and just keep screaming. The noise got really irritating, so, not to sound like a sociopath, we turned off that effect.

All in all, with all the potential it had, They Are Billions didn't quite deliver on its promise. It was obviously designed for the PC and suffered from a UI that would've worked better on a monitor. Aside from being overly difficult at times, we did have quite a bit of fun here, and this one is definitely more for hardcore RTS players out there.

Gamereactor UK
+
Looks good, fun to play most of the time, tense gameplay.
-
Overly difficult, tiny writing, a little awkward on controller, no campaign mode on console, no tutorial either.
is our network score. What's yours? The network score is the average of every country's score

"They Are Billions didn't quite deliver on its promise on console, as it was obviously designed for the PC and suffers from UI issues."

They Are Billions launches on PC with solo campaign

The New Empire landed yesterday, as hordes of the undead descend on Numantion's unique RTS.

They Are Billions comes to PS4 and Xbox One in July

BlitWorks has revealed that they're bringing the strategy game to Sony's console, and you can even play it with a mouse and keyboard if you want.

They Are Billions campaign will be "like a full new game"

Can you build a base that will survive the zombie apocalypse? 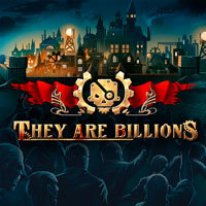