Yakuza: Like a Dragon might have a new main character, but this doesn't mean that we have to say farewell to older protagonists such as Kiryu and Majima. In fact, it's series head honcho, Toshihiro Nagoshi, who reveals in the latest Sega Nama cast that we will see many familiar faces, people who are still considered to be a major part of the Yakuza universe, and he also revealed that Ryu ga Gotoku Studio can't pretend like the previous games haven't happened:

"Guys like [Goro] Majima and [Taiga] Saejima will appear. Daigo [Dojima] and such... I wonder if that's it. The amount of screen time each character has is a bit different. It'd be weird if they were always there, wouldn't it?"

"The timeline goes on, so no matter what we have to tell stories such as, 'What happened after the Tojo Clan?' or 'What happened to Kamurocho?' Those parts become connected stories, and even though Kiryu will obviously have a smaller role since there is a new protagonist, we thought it was important to show how he's doing for fans. Pretending the story up until now didn't happen just because there is a new protagonist wouldn't be right, so that's not the case."

Yakuza: Like a Dragon will be released for PlayStation 4 sometime next year.

Yakuza: Like a Dragon is headed for PC and Xbox Series X

The Yakuza rumours turned out to be true - Yakuza: Like a Dragon is coming to Xbox later this year.

Could Yakuza: Like a Dragon be getting a PC release? According to Steam Database, it could.

Yakuza: Like a Dragon to get NG+ and higher difficulty option

Yakuza: Like a Dragon is set to get free DLC adding new difficulty option and New Game Plus in a future update.

You can stream the soundtracks right now, including the one for this year's entry, called Like A Dragon.

There are lots of familiar faces in Yakuza: Like a Dragon

Just because the series is heading in a new direction, it doesn't mean it's leaving its past behind.

Sega and Ryu ga Gotoku Studio will let us try the new concepts in a demo, but we don't know when that's coming. 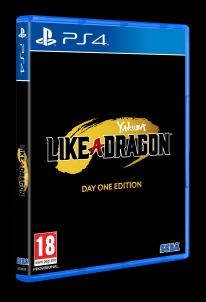