Recently, fans of Sega's Yakuza series were offered a special treat. In the past, the publisher's release policy was often incomprehensible for western territories, probably because Sega's decision-makers didn't think that their peculiarly Japanese content would be successful abroad. Several years later, however, Yakuza 0 marked the beginning of a sequence of new releases, remakes, and remasters that now comes to a close with the beautifully packaged collection of the series' third, fourth and fifth iterations. As a special gimmick, the set also includes a separate cover for Yakuza 5 in the design of its PlayStation 3 original because this title has never been released on disc over here. This underlines Sega's claim to retroactively bring the whole series together under one roof, for us to honour the heritage of the Dojima dragon.

But what exactly can you expect from chapters three to five? The games Yakuza Kiwami 1 and 2 were elaborate remakes, which became necessary because the originals ran on the PlayStation 2 and thus no longer met today's technical standards. For the games from the PlayStation 3 era, however, the people in charge thought that simple ports were sufficient, so the most obvious thing to highlight is the increased resolution (1080p) and the improved frame rates (60 fps). With Yakuza 3, this plan admittedly doesn't quite work out and some of the visuals are a bit rough. Animations are clunky as well and there are some very poor textures that tainted our overall impression of the visuals. This is especially odd as regularly worn clothes, like the Hawaiian shirt of protagonist Kazuma Kiryu, or the snake leather jacket of his beloved adversary Goro Majima, stand out, and not in a good way. In later instalments, the exact same clothes look much better, and we were disappointed that the quality wasn't maintained throughout.

Of course, with a pure remaster, you have to live with the fact that the technology is not quite up-to-date - the whole point is more about maintaining a certain degree of nostalgia and making the content available on modern consoles. The Yakuza Remastered Collection definitely achieves both of these goals. Connoisseurs of the series already know that the story revolves around the fate of Kazuma Kiryu, who once (more or less involuntarily) became the chairman of the powerful Tojo family that does their shady business in the entertainment district of Tokyo. Players can look forward to seemingly never-ending cutscenes and dialogue boxes, and Sega's Ryu-Ga-Gotoku Studio is hot on the heels of the likes of Hideo Kojima and the Howser Brothers when it comes to the number of lines of dialogue that can be found in its games. Thus, a certain affinity for Japanese mafia stories is definitely helpful, but if that's not quite to your taste the story sequences can be skipped or accelerated through if you prefer.

In terms of gameplay, the Yakuza series revolves around cleverly staged brawls, through which you level up your characters and equip them with new moves. You get to try a whole bunch of fighting styles in this remastered collection because aside from Kiryu there are more playable characters in games four and five. Apart from these main stories, which are very dramatic and dripping with testosterone, there are also countless side quests and mini-games, which oftentimes provide a very likeable and cheery contrast to the bleak realities of mafia business.

An example of this can be found in the Club Sega arcades, wherein we get to see HD-versions of Virtua Fighter 2 and (only in Yakuza 5) drumming game Taiko No Tatsujin. Apart from that, there's a wild mix of multiple-choice conversations, which sometimes even offer potentially life-changing contemplations, as well as mini-games galore with rather simple control schemes. There are even management simulations in which you're supposed to set up a nightclub or train martial artists for a tournament.

The highlight might be the taxi company, where Kiryu works in Yakuza 5. Here, there are regular taxi missions on the one hand, which are the exact opposite of Sega's immortal arcade hit Crazy Taxi (which we were reminiscing about just the other day). Instead of roaring through the city in an irresponsible, chaotic manner, you have to drive with extreme discipline, stop at red lights, indicate when turning, and even entertain your passengers with polite small talk while doing so. If aggression should build during this job, you can vent in highway races where you soup up your taxi in various areas and leave your opponents in the dust of a somewhat basic highway environment, very much like in Tokyo Extreme Racer 2 - all the while listening to the soundtracks of old Sega racing hits like OutRun or Daytona USA.

Most of these mini-games are optional, but even if you solely stick to the main campaigns, you'll need around 80 hours to play through all parts of this collection - hunters of platinum trophies will surely be busy for about 200 hours or longer! That said, you'll get a lot of value for your money, and even for players who have experienced the Yakuza Saga on PS3, there are new features. Back in the day, some content was deemed to be too sensitive and was thus removed from the Western releases. For example, activities such as dressing up girls in a cabaret nightclub were discarded, or the mini-game in the massage parlour that hints at some kind of special service in the end. That might not be the most tasteful stuff, yet it's so over-the-top that it feels rather naive, which is why these omissions were somewhat surprising. In short, even if we didn't need to mourn their absence before, now the games are complete in this regard. Also included are Japanese board games Shogi and Mahjong, and in addition to that, there are English subtitles for the Japanese karaoke songs, which you perform in the corresponding mini-game by pressing a bunch of buttons in time with the music.

Speaking of which, we probably should mention that the whole voice-over of all three games is only available in Japanese, so most will have to read lots of subtitles if you're going to follow the story properly.

For people who have never tried a Yakuza game before and now find their interest piqued, we wouldn't recommend starting with this collection, but rather play the games in the following order: Yakuza Kiwami 1 and 2, then Yakuza Remastered 3, 4 and 5, then Yakuza 0, and finally Yakuza 6. In our opinion, this will present the story in the best possible way. Moreover, it's certainly not a bad idea to play a different game after each one is completed - otherwise, you'll get the same feeling you would if you watched a James Bond movie every night. Nonetheless, The Yakuza Remastered Collection offers an almost wasteful amount of content for what it costs and we think it's very reasonably priced. For that, we applaud Sega for its efforts and are only left hoping for western releases of updated versions of series spin-offs such as Yakuza Kenzan and zombie-infested Dead Souls.

Advertisements
Gamereactor UK
+
Tons of content, decent quality remasters, a feast for Yakuza fans.
-
Not as impressive as the "Kiwami" remasters, Yakuza 3 looks downright ugly at times.
is our network score. What's yours? The network score is the average of every country's score

"You'll get a lot of value for your money, and even for players who have experienced the Yakuza Saga on PS3, there are new features."

Yakuza Remastered Collection of 3, 4, and 5 revealed

Yakuza 3 is available right now, and we'll get the other two in October and February respectively. 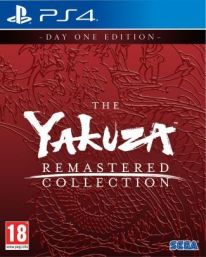