By making a zombie-themed game these days, you might follow the current fever and find a huge success, but you will also face some harsh competition - for example, Resident Evil 6, Dead Island: Riptide and Zombi U are just around the corner. On top of that, working on a licensed game, you will have to be very mindful of adding in fan-service. Finally, the undertaking is even riskier if there's another game based on the same IP - one that is already very successful and has a fanbase of its own.

This is that other The Walking Dead video game. Not the highly-acclaimed and successful Telltale episodic adventure based on the comics, but the First Person Survival experience by Terminal Reality based on the TV show, due out next year.

In this preview, we'd love to have offered you a general overview of the game and some first impressions on how the outcome will end up. Unfortunately, we'll have to stick to the former and leave opinions and gameplay anecdotes for later. Why? Because, despite the game being out sometime in 2013, the studio wasn't able to show any gameplay footage at Gamescom.

Therefore it's really difficult to form an opinion about the flow of the game, the actual survival experience, and it will be like. It also plants a seed of distrust with us which is a pity, since there are some interesting concepts behind it.

"We're calling it a first person survival game," principal effects artists Glenn Gamble tells us. "And it's really kind of an open approach to everything. You come into the second mission of the game, you're looking for gas and you start the level... and you can see the pharmacy and the general store on the left. You can see some smoke trailing out, which might be somebody trying to light a signal fire to get your attention without alerting all the walkers in the street. There is some buzzards circling over head which could lead to something, and then there is the big gasoline sign at the end of the road. And it's up to the player how they get to the gasoline sign."

General Artist Glenn Gamble did his best to show the development process and original ideas that are building up The Walking Dead Video Game in Cologne. He promised, as expected, that the studio has looked at what fans wanted the most from a game based on the TV series. With that in mind, and just before Season 3 goes live, they decided the best option for a chronological setup was choosing the week right after the outbreak. Since Rick is in a coma, the Dixon brothers were the best candidates for main characters. "They're much loved characters - AMC provided us with lots of info", Gamble explains. Naturally one has to wonder whether there is much interest in seeing how they first dealt with the calamity, when players already know where they end up.

Gameplay-wise, the main thing Terminal Reality pointed out during the presentation (illustrated only by still screenshots) was that focus is on the survival experience, making it clear this won't be a first person shooter. Indeed, "pulling out a gun is a bad idea", since the noise is going to attract walkers. They'll be as silly as you'd expect from any other undead ("they just seek the shortest line to you"), but that doesn't mean they won't be dangerous. They change their direction based on sounds or even smells - so be careful or you'll quickly find yourself completely surrounded. Also, following TV show style, "hidden walkers are even more dangerous", mainly when you're exploring a supposedly quiet area. "You'll have to decide how to approach them in every situation", developers promise. When you don't use a gun, there'll be an advanced melee system that the studio is putting major effort in, as finishes should be visceral, as far as both graphics and sound go.

Of course, these walkers and their actions must be the real protagonists of the game, and not Daryl Dixon. Taking advantage of their own, customizable technology (the Infernal Engine used in Ghostbusters), the studio is generating loads of walkers to scare the hell out of you and complicate your road to Atlanta. This is achieved by combining multiple zombie parts, trying to get lots of different characters on screen at the same time, with millions of combinations possible. The game still looked pale and soulless in screenshots, but if these crowd attacks end up believable and fluid, then it'll be an important cornerstone in the experience.

The Walking Dead Video Game will progress on a linear basis, but with some added open world aspects. You study the landscape and then decide whether to scavenge for resources, explore every option or follow the direct path to your mission.

That makes up what they call the "player choices", but then there are the "travel choices" and the "survivor choices", without a doubt one of the more interesting aspects shown of the game. As the game is a journey towards Atlanta, it will offer "road events", in which you have to act and decide between cargo, survivors, petrol... in the middle of the road. You need your truck for traveling from A to B in the map, so its size and your choices are rather relevant: "an abandoned car is an opportunity".

And what's survivor choices? Well, if your truck isn't big enough, or if you've filled it up with cargo, you won't be able to travel with many survivors, and here's the point: aside from a pain in the ass, they can be very useful, and central to the experience. You can send out survivors on missions for more resources and objectives, and it looks like "every survivor has a different story to tell", but on the other hand you'll have to carry them with you and find food for them. The day progresses, the resources are sparse and the walkers are nigh.

In the end, you should feel like "surviving along a small group of people in Georgia". We'll decide whether it's possible for this title to survive amidst the zombie games outbreak when it's actually playable.

Want to read about the worst game of 2013 (so far). Come right ahead, and hold your wallets close.

We meet some zombies with very little in the way of Survival Instinct.

"The game is visually conventional. The camera, less so. The studio's tinkered with the first-person view to enhance the fear factor."

The Walking Dead hits Wii U 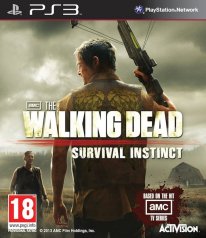