LIVE
HQ
| WarioWare: Get It Together
See in
HQ
HQ

The time has come for Telltale Games to tie up the loose ends in their hugely popular Walking Dead series. We've followed Clementine from a vulnerable little child that Lee protected in the first season to a survivor in the second season, via a fairly small role in the third season, and to what is a young adult accompanied by a young, jumpy, and somewhat troubled young boy in AJ.

For those who have played the series from the start and have a save file or Telltale account, there's the option of importing a save state and begin the adventure with Clementine carrying the baggage you chose for her (for better and worse). If you haven't for one reason or another (switching platforms perhaps), you've got the option of playing through a brief "story builder" that boils down the 30 odd hours of Clementine's adventure thus far into a handful of choices. In some ways, it cheapens what we've gone through, but on the other hand, hopefully there will be further payoffs for those who actually import their full saves, perhaps not in this the first episode, but towards the end.

By the looks of things it's been a while since the conclusion of the third season, AJ has grown a little, and Clementine has done her best to raise him, teach him how to protect himself, read (a little), and understand the world as it is. We catch up with them as they're driving down a narrow road, looking for somewhere to raid for something to eat, and they come across an old train station. They do find some food, but it's booby trapped and as things tend to do in the Walking Dead universe things go from bad to worse. Attacked by walkers they're forced to flee, but the car crashes and before losing consciousness Clem sees AJ being grabbed by an unknown person. Turns out, it's not a terrible thing, as a group of kids living at an abandoned school came to their rescue and it's this group that Clementine and AJ grow to know over the course of the first episode. It's Walking Dead meets Lord of the Flies as you're soon aware the group carries secrets, and that things may not be as sweet as they first appear. How have they managed to survive on their own? After all, the zombie apocalypse kicked off many years ago by now. We're going to leave it to you to discover what's happened here on your own, but as you might suspect there is a sinister side to the Ericson School for troubled youth.

In many ways the final season signals an end to an era for Telltale Games. It's said to be the final game to use their in-house engine and tools, and clearly as the series has had a major hand in the success of the studio it's a bittersweet departure. But that's not to say that it's business as usual, as in fact this first episode comes across as an evolution of the formula the studio has become known for, including subtle changes that make for more meaningful gameplay and in part allows for more exploration. The structure is also a bit different, as where there used to more and briefer chapters, here there is a prologue and three acts.

Clem and AJ have their own room at the school and you can decorate it with the collectibles you find (six in total in this episode); another nice touch. The system for achievements and trophies is also different, rewarding exploration and gameplay as well as story progression (the Platinum won't be quite as easy). The biggest change is perhaps the action gameplay, and while it retains parts of the quick time event systems from previous entries it feels way more dynamic. Walker encounters typically allow you to move freely, choose whether to attack the head first or known them down, and in one section you could also lure walkers into traps you trigger.

In terms of the visuals and the presentation it's also clear that it's been kicked up a notch and in parts the game truly shines. We didn't encounter any bugs or glitches (we played it on PS4) which is a bit of a rarity in Telltale titles at launch, so that's also a big plus.

Done Running is an interesting start to what promises to be an emotional fourth and final season. In some ways it felt a bit detached from the earlier seasons, and that it was setting us up for the dramatic reveal at the end of the episode. With three episodes remaining, and all of them coming out this year, we're eager to find out where this is going and how Clementine and AJ will get on with the rest of the kids at the school and perhaps more importantly the outside world.

As is our usual procedure we'll return with a review of the full season once the final chapter of the season has been released.

Gamereactor UK
+
Clementine is back at the centre of the story, More dynamic action sequences, Many relationships to manage.
-
Felt a bit detached from previous seasons, The scenario felt a bit familiar to usual Walking Dead scenarios.
is our network score. What's yours? The network score is the average of every country's score

Thank you for your time. We will take care of this matter as soon as posible
hmm, might be worth checking out. I think the quality of these games really haven't improved since season 1 and the freshness that had has completely disappeared. I got bored after ep.3 of the last season and didn't finish (I played season 1 about 3 times). Hope this is better. 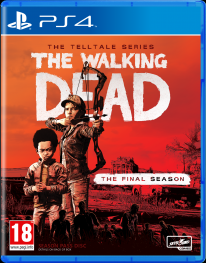