Deck 13 Interactive's most recent title was Lords of the Fallen from 2014 (a collaboration with CI Games), a fantasy-themed Dark Souls-esque action-RPG that was criticised for being too much like Dark Souls by some (and not for being similar enough by others, no doubt). With that in mind, The Surge sees the studio setting out to create a new experience, this time played out against the backdrop of a futuristic setting, and with a hint of industrial dystopia.

During the gameplay demo at publisher Focus Home Interactive's annual showcase event we got a good understanding of the key components of the game. The combat rolls with your usual dance of dodging and attacking, figuring out enemy patterns and perfecting your combos to deal the most damage. Your options include a horizontal and vertical attack, a block and a dodge. The player has a limited amount of stamina that he can spend on various attacks, and after his stamina runs out, his attacks become weak and slow. Each successful hit gives the player energy that can be spent on various actions. Our demo only allowed us to use finishing moves with that energy, but the game features multiple item-based unlocks that allow energy to be used in different ways. Energy depletes slowly as you are not attacking, so most encounters start with a depleted energy bar.

An added element to consider is the ability to target specific body parts. It's a tactical choice of whether to figure out the enemy's weak spots for maximum damage, or for an extra challenge, you can deal damage to their armour or weapon/limbs and try to chop that part off with a finishing move in order to secure crafting materials. As far as weapons go, you can pick up an enemy's weapon for use straight away, while you'll need to make your way to a crafting table to sort new armour parts.

Crafting and levelling up happens at said crafting stations. Enemies drop Tech Scrap, which can be used to level up your exoskeleton or craft new pieces of armour. Each weapon and piece of armour uses energy, and levelling up your exoskeleton increases the available energy, sort of like Iron Man's suit. This becomes a fine balance of choosing what to spend your Tech Scrap on, as levelling up your exoskeleton doesn't do anything for you if you don't have anything to use that extra energy on, while focusing on your equipment alone leaves you unable to use them. In addition, the character can be equipped with implants, which offer various additional perks, such as visible enemy HP or helpful hints. Additionally, there are elements in the world that require a high-powered exoskeleton to interact with, unlocking additional areas where you may find more loot, or alternatively to make progress in the game itself.

Dying in battle is punished in a similar way to how it is handled in Dark Souls. You drop all the Tech Scrap you're currently carrying, and upon respawning you have a limited time to go pick it back up. All of the enemies have respawned, so you'll often have to fight through multiple opponents, and sometimes you'll have to choose between fight and flight to reach your Tech Scrap in time. And if you die, it's gone forever. The crafting station has a banking option, so as long as you remember to bank your scrap your loss shouldn't be catastrophic.

The game's narrative is told through multiple means. The initial crafting station has a hologram AI that will get you up to speed on current events, demonstrating various dialogue options and choices done during and in-between conversations. While the hologram AI was rather monotone, the developers confirmed you will meet real people that might help you, need your help, or that you may choose to kill. Throughout the adventure you will also encounter audio logs, diaries, emails and other collectable, and these will flesh out the world around you.

With the range of enemies on show, from armoured humanoids to robots and everything in-between, and it feels like there's lots of potential for customisation. Ripping off armour parts with gory finishing moves felt very satisfying, and sitting down at the crafting table to enjoy the fruits of your labour definitely brought a great sense of reward. Sadly our short hands-on session didn't lead us to a boss fight or advanced enemies and thus the tasty gear they'll hopefully yield, but even those we encountered in this short demo proved a great challenge.

Overall, we had a good time The Surge, which shows us that Deck 13 has taken on feedback and learned much from making their last hardcore action-RPG. After having been passed over on development duties for Lords of the Fallen 2 (or was it the other way around?), the studio has come back with something that has even more potential. The Surge sees release in May 2017 on PC, PlayStation 4 and Xbox One. 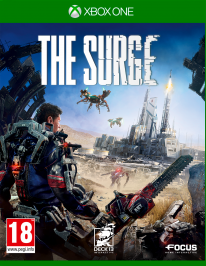