The Surge launched in May and it went down very well with a lot of people. Therefore Deck 13's Timm Schwank was in LA at E3 to tell the world about the game's upcoming expansion, which is due to land before the end of the year. First, though, Schwank told us about the upcoming tweaks coming to The Surge.

"So we're preparing summer patches for all the platforms, so we are giving further support," he told us in LA. Later he also mentioned another patch due to land around the same time as the paid-for DLC, which will update the game for all players but in particular, could enhance it for those who buy the paid-for expansion.

Schwank also confirmed that the first expansion for the game is "coming out at the end of this year with totally new content. So new level, new enemies, new weapons, and so on. Full package."

When asked about the setting of the DLC, the man from Deck 13 said: "It's within The Surge world, so it will enhance it. It will have some kind of tweaks on the whole game itself. It will add some things here and there, but mostly it adds a new area with some new story twists, and some further information."

Speaking of the studio's cryptic clues, Schwank teased things to find in the expansion that might point to further content in The Surge: "Here and there we give some extra information, and some new, hinting to you further stuff in the future." Cryptic indeed.

You can read our review of The Surge for more about the game. 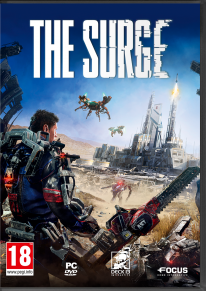