The Kraken rounds out all presently planned content for The Surge 2 and looks to be the crowning jewel of the sci-fi sequel's otherwise sparing season pass. The DLC promises to deliver more limb-dismembering action as well as including the usual trimmings of a new setting, new gear sets, and a brand new storyline. With this being the only story content to debut within the season pass, however, we couldn't help but wonder: will this expand upon the sequel in meaningful ways or will it work to usher in bitter feelings of buyer's remorse?

Right off the bat, we should note that to access the DLC you must have completed roughly half of the main story and made your way back to Port Nixon. Here, you can board an out of place orange boat that will transport you to the VBS Krakow, a breached military vessel turned suburban neighbourhood, which serves as the backdrop for the latest expansion. The former home for the privileged and wealthy couldn't be further from its former glory as bludgeoned corpses line the streets, crazed souls in mech suits run rampant, and an AI threat known as CAIN watches down on the streets with a piercing red spotlight.

The sense of variety here is good; the VBS Krakow's sun-washed suburban streets and abandoned downtown drive-in movie theatre carry a quirky 80s feel and are like nothing we have seen in the base game. The setting is certainly stunning but sadly there's little fun to be had within this newfound playground other than freeing it from CAIN's stranglehold. There's audio logs you can find and a handful of side quests you can undertake for you new robo-buddy, Proto, but these diversions often felt needlessly shoehorned in. One side mission we had to fight through waves of enemies (a repeat of what we had done earlier) and another was a simple fetch quest to gather the aforementioned robot a charged power core.

The setting earns our praise but we weren't equally as impressed by the pirates that occupied the streets of the plundered vessel. These new baddies felt identical to the exosuit-wearing grunts we regularly encountered in the main game and did little to shake up combat. The biggest change to that came through CAIN's spotlight and this offered a stealth element to proceedings as being identified caused enemies to rush to your location and unleashed robotic spiders. This inspired us to choose our attacks even more tactically than usual and pick our foes off one by one whilst darting out of the path of the glaring red beam.

As we grappled mercilessly with the area's two main boss encounters we found a highlight as each presented a sizable challenge, even for the later stretches of the campaign. The first boss, Collective Incinerator, proved tough as nails as we had to precisely parry his flaming axe thrusts and swings whilst avoiding toxin-spewing spider-bots and scorched patches of grass that caused our exosuit to burn up rapidly. The last encounter, (which we won't spoil), kept us on our toes too as it spewed ink at us to distort our vision and smashed into the ground like a wrecking ball to inflict considerable damage on impact.

The Kraken's largest shortcoming is its length. We found ourselves completing the DLC in roughly two hours and our playthrough included completing all side objectives and having to return to our medbay in defeat a large number of times. We enjoyed the majority of what it had to offer, but it felt surprisingly light on content, which is disappointing especially considering its price tag and standing as the only story-based content included in the season pass. With the DLC only accessible at such a late stage, we felt reluctant to change into the new armour sets offered as it required going through the same loop of harvesting tech scraps and upgrade materials just to be able to get it on par with our present inventory.

With its fleeting two hour running time, lacklustre side distractions, and late arrival into the campaign, The Kraken fails to make its mark and doesn't represent a vital addition to The Surge 2. The suburban setting does mark a nice change of pace and the boss encounters are well-crafted, but we can't help but feel that it should have belonged as just another part of the base game. Let's hope that more content is planned beyond the season pass as this would make for a rather disappointing conclusion to an otherwise quality sequel.

HQ
Gamereactor UK
+
We enjoyed the suburban '80s-inspired setting, the boss battles presented a hefty challenge even for the late game.
-
It's disappointingly short, the side quests lack imagination, and it can only be accessed late into the campaign, the new armour sets would have required too much grind to be considered useful.
is our network score. What's yours? The network score is the average of every country's score 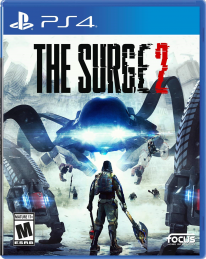