We've had our eyes firmly fixed on Deck 13's sci-fi take on the Souls-bourne genre since its launch; delving deep into the main entry as well as its accompanying DLC expansions (A Walk in the Park and The Good, the Bad and the Augmented). We were pleased with news of an upcoming sequel as the original was bloody, fast-paced and featured a novel mechanic where you could severe off your opponents' limbs and then fuse them to your own exoskeleton for buffs in attack and defence (brutal indeed). With that in mind, and with the second entry now just two months from release, we got the opportunity to play through the first few hours of the game on PC and were able to explore three different areas of the new setting: Jericho City.

Déjà vu struck within the opening moments of The Surge 2 as it's pretty much identical to that of The Walking Dead (besides the change in threat, of course). You awaken from a coma in a hospital bed, miraculously unharmed but only to find that society has crumbled to ruin and an illness known as the 'Defrag Virus' has swept through the city sending residents into a crazed state and pushing them to bludgeon any survivors they encounter to a bloody pulp. There are no flashy cinematics here like there were in the original but we suspect that these were removed in order to get us right into the action (looking at the Steam page it mentions that our character's plane was knocked out of the sky by a storm and this scene was omitted, so it certainly seems likely).

The first notable difference is that The Surge 2 introduces its own character creation system rather than sticking with a bland stock protagonist like the original did before. Here, like in many other RPGs, you can tweak details such as your character's gender, facial features, outfit, and perhaps most interesting, their former profession. These include Search and Rescue Officer, Former Arms Smuggler, and Mining Wars Veteran, although we don't know yet what bearing this choice might have on gameplay or the story. We liked that we had the freedom to customise our character but the fact that they didn't speak at all didn't help one issue that we had with the first game. Also, once we'd suited up into different armour sets we could barely see what our character looked like, which made the whole thing feel kind of pointless.

As previously mentioned, the preview build allowed us to explore three different locales and these were Downtown Jericho, Seaside Court, and Port Nixon respectively. Downtown Jericho's graffiti-riddled streets were lined with crumbling buildings, abandoned vehicles, and pools of toxic waste. Seaside Court served as a hub area where we could interact with many different NPCs and this was housed within a rundown old shopping mall. The final location, Port Nixon, was more of an extension of Downtown Jericho with the obvious difference being that it was beside the sea and water served as a big environmental hazard. Each of these locales felt like a step up from the admittedly bland confines of the CREO facility and we enjoyed being able to see how the virus had impacted the world on the outside.

The devs appear to have taken an "if it ain't broke, don't fix it" approach to combat as pretty much everything remains intact from the original, for better and for worse. You'll still frantically exchange blows whilst managing your stamina and hacking away at an opponent's limbs to later harvest. A subtle change is that your tech scraps (similar to souls in Dark Souls) now heal you if you're within a certain distance of them and they fully heal you when collected. This is a nice touch as it presents the player with the choice of whether they want their full health back or would rather have health consistently restored over a longer period of time. There's also plenty more gory animations for executions but these feel a little janky and cause you to unexpectedly lunge forward, sometimes even into a water hazard or another group of foes.

Enemy variety saw some improvements from what we've seen but the majority of the time we were just finding the typical infected humans in armoured rigs. Some of the newer enemies threw down turrets to lock onto us and others released small spider-like robots that would explode on impact and cause considerable damage. Another improvement we saw was with the companion drone and how it can be used during combat. You can now target individual limbs and press the Y button (using an Xbox One controller) to launch an attack. This is great for taking down foes as we can now target their weak spots, and it was also a helpful tool for dispatching turrets without having to move into their line of fire.

Seaside Court, which we touched upon earlier, teased some new features that we may see expanded upon within the game. This non-combat zone was filled with NPCs with some selling us armour and drone parts and others offering side-quests for additional rewards. One of these quests saw us search for ten audio legs for a gossip hungry vending machine known as Mr. Scrappy, and another other had us track down a debt collector who was harassing one of the area's merchants. The addition of more side content we felt shattered the sense of linearity we remember from the original, and the merchants presented us with even more ways of getting loot beyond simply grinding and exploring for dropped items.

After fighting through the streets of Jericho City we faced off against the first major boss, Little Johnny, who attacked us from the comfort of a large spider-like robot. Being as observant as we are, we noticed that this is the same blue-eye monstrosity that's giving us a piercing stare in the game's cover art. In the battle we had to hack away its legs whilst avoiding its powerful body slams and the spewing poison gas that seeped out from where we had inflicted damage. It was a decent skill check that's for sure (we had to retreat for a fair bit of grinding) but it also felt a little too similar to the first boss from the original in terms of both looks and mechanics.

At the end of our stay in Jericho City we found ourselves pining for more content which is testament to how much we enjoyed this short demo. We found the crumbled cityscape of Jericho City to be a more inspired setting than the facility of old, and new additions such as more side quests, merchants, and better enemy variety really helped raise the bar for us. That's not to say we don't have our concerns, as execution animations still feel clunky, and we didn't encounter a protagonist interesting enough to carry the story forward. We will have to see how things shape up come launch but fortunately the wait isn't long as The Surge 2 is set to release on September 24 on PC, PS4, and Xbox One. 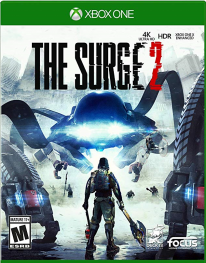