The Sinking City has now released for Xbox Series S/X

Players who own the older versions will sadly not be able to get a free upgrade.

The Sinking City delisted from Steam again after legal battle

Frogware's DMCA claim against Nacon has drowned the game again.

The horror game was previously pulled from digital storefronts due to a legal dispute.

Frogwares urges fans not to purchase The Sinking City on Steam

The horror title recently returned to the platform after being pulled due to a legal dispute.

The Sinking City gets a store listing again

Following Nacon's first legal dispute win in the case, the title is once again available to purchase.

The Sinking City is on Switch right now, and here's a new trailer

Switch players can play The Sinking City next week

September 12 is the newly-revealed release date, and we have a brand new trailer to get us even more excited.

Here's the first gameplay for The Sinking City on Switch

Frogwares has shown off the game and its features on the console, which they say is more than a port.

Today on GR Live we're diving into The Sinking City

The Sinking City is heading to Nintendo Switch later this year

One announcement that might have slipped you by last night is the news that the upcoming Lovecraftian horror-adventure is also heading to Nintendo's console.

Frogwares' game is due to launch next month, and here we get another look into Charles Reed's journey into Oakmont.

The Sinking City is among the games being shown there, alongside WRC 8, Bee Simulator, and plenty more.

We've been shown the first main quest of the game, so you can take a look at Frogware's title ahead of the June release.

Disclaimer, before the game starts, warns of racism in the next title from French studio Frogwares. 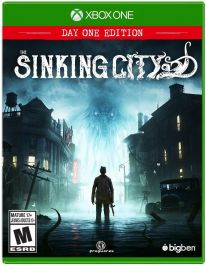