Small independent developer Frogwares has been putting the minds of aspiring detectives to work with its video game adaptations of the world-famous Sherlock Holmes franchise for many years, and the developer has done so masterfully. When it was announced that the studio would be releasing a game based on the fictional entity by H. P. Lovecraft, Cthulhu, gamers were intrigued. While the cosmic entity in question is a prime antagonist for a video game, getting the setting, narrative and genre right is no easy feat.

Frogwares' The Sinking City has taken the investigative horror adventure route and drops the player in the city of Oakmont, a half-submerged island civilisation where the streets have disappeared into the depths after a massive, supernatural flood. Oakmont hasn't been quite the same since the flood and some of its citizens have been acting strange and speaking of visions and it's up to you, playing as private investigator Charles W. Reed (who has been experiencing those same visions the citizens of Oakmont describe since his days as a navy diver) to find the answer to what's been causing them.

Reed arrives in the city by boat after receiving a letter regarding the source of the visions. Moments after setting foot on the island his first case is handed to him; the son of one of the cities' 'grand families' has gone missing after an expedition to the depths of the black waters just outside of the port, and murder seems to have been committed in a house nearby. It's not long before the player is introduced to the main part of the game: investigation. Reed can pick items up to investigate them, much like you could in the Sherlock games, but he has a grand trick up his sleeve, unlike the fictional master detective.

With the insanity growing within him, Reed has the ability to channel his visions to find things others have missed, displaying certain items in bright UV light (such as hobo signs, used for locating valuable crafting elements and dangerous buildings with monstrosities and loot inside) and even giving him the ability to visualise the past, both as flashing images through inspecting certain items and full spectral reenactments of crimes or other happenings through picking up traces of the past. The latter pulls the player into a seemingly different realm and as you pick up a trace, a scene is reenacted, and you'll have to piece them together in the order that they happened. Doing this will give you an accurate image of what happened at the location and give you clues, as will inspecting items throughout the game.

The clues will then end up in your casebook in the menu and it's important to check your notes for the entirety of the game because you can most definitely get lost in the vastness of it. Once you've collected enough clues you'll be able to go to your 'mind palace', which is basically where you make all of your deductions, piecing the evidence together to get to the bottom of whatever case you've taken on. The game offers a consequence-based deduction system where your choices decide how the world around you reacts.

Using your spectral vision drains your sanity, which can ultimately kill you, so we do not recommend going through life as Mr Reed in a separate realm for too long, even though it can be useful. To take the edge off your poor brain you can craft and use antipsychotics. Crafting lets you use materials you've picked up in boxes, lockers or trashcans around the world (or the materials you're granted after completing a main or side mission) and there's no shortage of crafting items either. We never found ourselves short on ammunition, first aid kits, grenades, or antipsychotics.

The Sinking City offers a whole lot of combat if you seek it. Throughout the game, you'll encounter nightmarish monstrosities that will kill you fast if you let them and even though we'd love to praise the game for its combat, sadly we can't. Shooting isn't too bad but it does feel very dated (think early 2000s survival mechanics), using items in combat is slow and tedious, and melee attacks are stiff. The combat is nothing short of an annoyance and left us wondering why the combat element was even introduced to the game in the first place. It would have been much more intriguing had Reed been defenceless against the otherworldly threat of the depths below the city.

There is a skill system in place to help Reed both in and out of combat and it does help once you level up enough to get the melee speed upgrade, however, levelling up takes time and you need those points for other upgrades as well. The skill trees are combat proficiency, vigour and mind. Combat proficiency focuses on gun damage and accuracy for a submachine gun, items and explosives; vigour focuses on your carry-capacity (ammunition, explosives and medical items), melee strength, and speed; and vitality-based skills focus on crafting, experience gain, and sanity.

The in-game world certainly is intriguing with its old-school, 1920s horror vibe and all the strange civilians lurking about, but we will say that the traversal gets tedious at times. With Oakmont being partially submerged, the player has to navigate both muddy cobblestone streets and Venice-like canals (if Venice was infested with killer eels) and while the boats make sense for the world Frogwares has built, jumping in and out of one to travel 100 metres gets old really fast. Thankfully there's a fast travel system in place to help you out, so once you find a pay phone (they're hard to miss but you do have to get close enough to get the prompt for the game to save the location) you won't have to spend ten minutes traversing the map to get there the next time you need to. The open world concept is nice, but with traversal taking so long and a lot of the scenery looking the same (as it should, to be fair), after a while it gets rough to sit through every boat ride and pavement stroll. Speaking of strolls, get ready to look up streets from your notes on your map a lot; there are a lot of mission locations playing hide and seek with you, some of which you need to manually find on the map or in the world.

Despite the flaws of The Sinking City, the world Frogwares has created is intriguing and the narrative pulls the player in masterfully. Reed's insanity is handled splendidly and the mechanic where you use that insanity to your advantage is interesting and innovative. There's something really special about uncovering the secrets of the depths of the ocean, investigating supernaturally influenced killings, and exploring the horrors of the mind of H. P. Lovecraft. Even though the game isn't flawless, its narrative and world hold it up above the surface quite well.

The Sinking City is on Switch right now, and here's a new trailer

Switch players can play The Sinking City next week

September 12 is the newly-revealed release date, and we have a brand new trailer to get us even more excited.

Here's the first gameplay for The Sinking City on Switch

Frogwares has shown off the game and its features on the console, which they say is more than a port.

Today on GR Live we're diving into The Sinking City

The Sinking City is heading to Nintendo Switch later this year

One announcement that might have slipped you by last night is the news that the upcoming Lovecraftian horror-adventure is also heading to Nintendo's console. 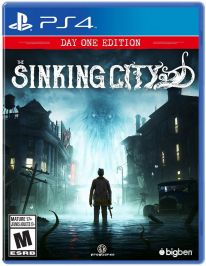