Like every game in The Sims series, The Sims 4 (which released over four years ago) keeps on expanding dramatically thanks to the many expansions we've been given. After five of these - which have expanded not only the skills of your Sim, but also extended the neighborhoods and the colourful cities that the game has to offer - it's now the turn of The Sims 4: Get Famous, the new DLC that allows your Sims to become a movie and/or television star.

It's not a new feature to allow your Sims to embark on a career in show business. In fact, among the careers available in The Sims 3 there was a film career, where players could choose to pursue the actor or director career after reaching level 5 in that job, and we should mention the Superstar add-on in the very first The Sims, which allowed us to meet stars like Marylin Monroe or Christina Aguilera.

In Get Famous, we're catapulted into a world made of auditions, shooting on set, important roles, as well as being forced to keep your popularity level high by exploiting the power of social networks and the all-important relationships. In fact, even more than in the past you have statistics related to your reputation, an aspect that can be fed by continuing to post "selfies" and regular updates on your main social channels, so as to always maintain a high number of followers and fans who follow your progress as you get more famous.

In this expansion, as in the past, it's clear that there's a deep irony that lies behind a project like The Sims 4, a game that's part of a series that has always closely followed the evolution of contemporary society, not without forgetting to make fun of it and allowing us to have some laughs. The lightheartedness that has always distinguished the Sims brand is even more evident here, making fun of certain ephemeral customs that have actually shaped our current lives, but always in a fun and friendly way, without ever taking itself too seriously. This isn't a scathing critique of fame and fortune, in other words.

As we mentioned before, Get Famous revolves around the addition of a new profession, but also a new area, called Del Sol Valley, a digital reinterpretation of the one and only Hollywood, with all its pros and cons. When players decide to pursue this career, they will have to compete with increasingly difficult casting calls, which require the learning or improvement of some of your Sim's qualities, like boosting their dialectic ability, sense of humour, and even physical prowess in order to get a coveted role.

Once we manage to pass the auditions, shooting begins. It's possible - but not mandatory - to follow your Sim on the set, an experience that took us back to the good ol' times of The Movies, the hilarious Lionhead game published in 2005. Clearly Get Famous offers a far more complex and layered experience than the Lionhead game, but there are some features related to your work that pays homage to one of the first simulation games dedicated to the world of film.

Before shooting starts, your Sim must undergo a "hair and makeup" session, rehearse with their co-stars, try to build a relationship with the crew (even simply going to the buffet to eat a slice of pizza will help), and discuss your role with the director - all elements that contribute to perfectly recreating the atmosphere that you can feel on a film set. After satisfying certain social and technical conditions, you can start shooting, following all of the action, and you can also choose to let your Sim improvise (not without some risk, of course!).

Obviously, before becoming a big star, your Sim is faced with rejection - which has an effect on their mood - as well as appearances in terrible films and useless commercials, although these are all very useful in boosting your popularity. In the early stages, seeing your Sim turned away from the most exclusive parties and clubs is sad to see, but with commitment and dedication, you will be rewarded.

Based on the traits chosen for your character, it's really fun to see how this notoriety influences your Sim's artistic career. During our first run, we chose to be a VIP who's down to earth, determined but never dedicated to excess; in other words, not a diva. In a second playthrough, however, we decided to proceed in exactly the opposite way, and it was really entertaining. We created a real monster - an unbearable and spoiled actress, comparable to certain Hollywood stars of the past.

It's that great freedom, combined with so many moments of pure fun dictated by the situations you find yourself in, that made Get Famous so enjoyable. This expansion was much-needed, it brings back some verve and vivacity, as well as that certain irreverent way of portraying ordinary life which has always characterised the series. Although around The Sims 4's original release we had a few complaints, finding ourselves with a somewhat empty and less interesting experience than usual, with all these new expansions - in particular, Get Famous - we get to see once again how unique this popular life sim series can be, underlining the ironic and light-hearted character with which this franchise was initially conceived. Irreverent, fun, and wild, The Sims 4: Get Famous is the series back in the kind of shape that longtime fans will enjoy.

Advertisements
Gamereactor UK
+
Irreverent and crazy, The ironic spirit that has always distinguished the series is back, A new neighborhood, Themed content, Life on the set.
-
The lack of other film professions, such as director and screenwriter.
is our network score. What's yours? The network score is the average of every country's score

REVIEW. Written by Fabrizia Malgieri on the 21st of December 2018 at 09

"A great amount of freedom, combined with so many moments of pure fun dictated by the situations you find yourself in, made Get Famous so enjoyable." 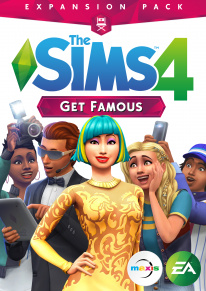