Yakuza producer Toshihiro Nagoshi has had a long and decorated career in the video game industry, and during a recent feature with Edge (as brought to use by ResetEra's Eolz), he talked about the originally Yakuza, revealing that it was in fact also pitched to Microsoft and Nintendo, and was very close to never seeing the light of day at all.

"It became difficult for Japanese companies to compete with western games of high quality and big budgets (...) if we wanted to do, it would have to be sports, or military, or fantasy (...) and it would need to release worldwide. (...) since everyone was thinking the same things, everyone was making similar games."

"But I thought it wasn't right to follow that direction. So, first, I abandoned the idea of selling worldwide. Next, I decided I wouldn't mind if female players didn't like the game; then that no children were allowed. When I decided all that, the only target left was the Japanese male."

"My bosses took some convincing. I did a presentation twice, and didn't get approval. Sega was struggling for cash and was very close to bankruptcy, so it merged with Sammy. As soon as it happened, I went to see the new owner and presented the game to him, looking for his approval. Professionally, this was highly irregular and quite wrong. But I knew if the owner said "yes", it would be good for the entire company. I got his approval, but our CEO was really mad about it (laughs). He said it was unfair."

"I've never said this before, but while we released this game with Sony, I'd done presentations about it to Microsoft and Nintendo. Back then they said "No we don't want it." Now they say, "We want it!" (laughs) They didn't understand the reason why I created it."

"I'm often asked how I did all the research, but it's Japanese culture (...) but I did some of my own, yes. I like drinking. I also like women. I was having lots of fun in my life for a long time - whether to shake off my stress from work, or deepen the connection with my subordinates. (...) I learned a lot of interesting stories from the people I met. And some surprising stories, and some sad ones. They became elements of Yakuza's story. The name Kiryu is one of them (...). I often do that in my games - I use the name of a person I liked or who looked after me well. I still do that today."

Are you glad to see it as a Sony exclusive to this day?

The original Yakuza was presented to Microsoft and Nintendo

It originally ended up as a PlayStation 2 title. 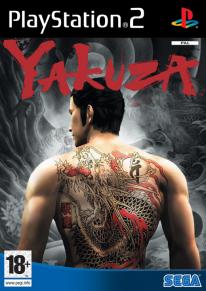