In its Nioh games, Team Ninja forces larger-than-life interpretations of real and mystical characters into a fantastic story, loosely based on events taken from the Japanese Sengoku period. From a narrative point of view, they tell tales about the corruption of people who, with the help of a demonic energy source called Amrita, approach ominous powers of the Yokai to ultimately loose themselves in it. Motifs and developments can often be foreseen early on, but the eye-catching production and the tight narrative style make up for this somewhat.

In Nioh, the well-known gameplay mix of light and heavy attacks is expanded to include three combat stances, which gradually exchange the damage caused for mobility. In addition, the stamina bar, which determines how many actions you can chain together before you have to withdraw, has been expanded with a rhythmic element that rewards good timing. Combos, spells and ninja tools open up situational opportunities and you can unleash your guardian spirit that, once activated, grants further advantages in combat. In Nioh 2 there is a mana bar on top of all that, which is used for special Yokai skills that can help you out of dangerous situations.

These first two games released recently as a new edition for the PlayStation 5 in form of The Nioh Collection. You can play both PS4 adventures on the PS5 since day one thanks to backwards compatibility, which is already a notable increase in performance compared to the last generation of consoles. However, the remastered versions of Nioh 1 and Nioh 2 offer two remarkable unique selling points on the latest hardware: On one hand, the loading times are now in the low single-digit seconds range. In the original version you have to wait around 20-30 seconds to start the game and each time you die, whereas in the two optimised remasters you are back in the game almost immediately. This is noticeable since you will often bless the temporal (or turn off the console in frustration).

The second difference is the 120 fps mode, which significantly reduces the visual appearance of both games, but offers very high frame rates on supported monitors instead. In the older Nioh 1, this mode is very convincing, but not as strong as the Quality mode experience. Due to the more complex visual effects that can be found in Nioh 2 you have to accept significant cuts in the visual range, the resolution and, above all, the level of detail of shadows. Also, the frame rate often stutters, which is why you should rather switch to one of the other two display modes (4K or Performance). In general, I liked the quality modes in both games the most.

Apart from these technological optimizations, The Nioh Collection offers a lot for the price of £69.99. Nioh 1 alone takes around 50 hours and the successor is a bit more packed in terms of content. Both action games received three substantial add-ons after their initial release, all of which are between six and ten hours long. How fast you can bite your way through all this content depends primarily on your own abilities and how often you fall into the game's trap. You can definitely expect an overwhelming amount of difficult challenges if that's what you are looking for.

Souls-likes have a reputation for being quite difficult, but the great interest in the topic shows that these games are ultimately not as inaccessible as they should appear from the outside. If you want to take a look, too, a bundled re-release like the one The Nioh Collection is offering is a great opportunity to buy a lot of content in the best possible form while saving a certain amount of money. However, Nioh is one of the more difficult representatives of its kind because the high speed leaves little room for mistakes and Team Ninja punishes every one of your errors in a most frustrating way. What's more is that applies not only to dueling challenging enemies, but also to level design and the positioning of obstacles.

Anyone who has already gained some previous experience with a Nioh game can have their PlayStation 4's save games transferred to the Remastered Collection. To do this, you have to select the Cross-Save Management option (Main Menu> System) in the respective original games and save your data online at Koei Tecmo via Cloud Save. Switch over to the remaster and download this file afterwards to use it (btw. That unlocks many of the trophies you already own). For some reason, my console always wants to install the PS4 game of Nioh 1 and doesn't automatically switch over to the (installed) PS5 version, which is a negligible teething trouble that Sony will surely fix in the foreseeable future.

The haptic feedback from the DualSense controller has been integrated as well, but the technology does not offer a significant benefit for the Souls-like subgenre. When moving through destructible objects, the gamepad now vibrates gently and the triggers simulate resistance when firing ranged weapons. Team Ninja implemented the console's Activity features into their Remasters, too, but since they are missing important quest information, they appear rather useless. It essentially offers another way to jump into a handful of missions via the PlayStation submenu.

I noticed a few sound and display bugs, but apart from that, both games run very smoothly on the PS5. The Nioh Collection is an impressive port of two solid action games and that makes it the ideal entry point for anyone who has missed out on Nioh until now and is (virtually) willing to die catching up on it. Unfortunately, the game wears out a lot towards the end, but if you manage the challenges well, you will find yourself a multitude of additional content that is often worth your time. Still, I am very happy that Team Ninja is now taking a look at other games. Let's hope the Japanese find some inspiration before they unleash the Yokai over Japan once again.

Advertisements
Gamereactor UK
+
Technically enhanced PS5 port, you get a lot of content for the money, solid action games with high production values.
-
You should be almost frustration-resistant, the two games are very uniform and a lot of content is being recycled.
is our network score. What's yours? The network score is the average of every country's score

REVIEW. Written by Stefan Briesenick on the 11th of February 2021 at 13

You can now get the first two Nioh installations with all six previously launched DLC episodes in one technically enhanced package. 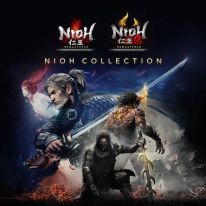