Before Bloober Team scared our socks off with its tale of a painter's descent into madness Layers of Fear, it had actually been busy laying the groundwork for another psychological horror, one that had to be put on the backburner due to its ambitious scope. The Medium was first dreamed up in 2012 with the idea of being able to explore two realities simultaneously. Although Bloober has produced some great psychological horrors over the years, The Medium is easily its most hotly-anticipated, as it been built from the ground up for the Xbox Series and has some major names attached such as Silent Hill composer Akira Yamaoka and veteran voice actor Troy Baker. So, does it live up to the hype?

The Medium sees you step into the shoes of Marianne, a young woman, who has been gifted (or cursed) with being able to experience both the world of the living and the dead. We're introduced to her as she is being put through the painful ordeal of helping her foster father pass on into the realm of the spirit world. Following this, Marianne receives a phone call from a stranger called Thomas, who claims that he can give her the answers for her unique powers. Desperate for answers, Marianne sets out to find his mysterious man and heads out to the location of a dilapidated old communist resort to try and locate him. This setup had me gripped from the start as it presented so many questions. Who was this mysterious man? How did he know Marianne? And why is she the only one to have these powers?

With the game being reliant on story, I don't want to give too much away within this review, but I have to say that this is one of the most gripping narratives I've experienced in a horror game. Something that really kept me invested was the quality of the voice talent as everything right down to the most intricate details (for example, gathering a collectible) are voiced to an excellent standard. Troy Baker as the game's main antagonist The Maw especially knocks it out of the park here with his performance. Baker's voice here is almost unrecognisable, and he does a great job of evoking fear with his many taunts, as you're desperately trying to hold onto your breath to ensure that you are not spotted.

With Marianne being a medium, you have a chance to explore both the realms of the real world and the spirit world. This mechanic isn't gimmicky as I first worried and it makes for some really interesting puzzles and some stunning visual effects. Playing The Medium on my Xbox Series X was one of the few times that I got that real 'next-gen' feeling from my console as certain events unfolding on my screen didn't seem like they would be possible on older hardware. At times, the game displays both worlds simultaneously (almost like split-screen multiplayer) and it's like two different games are being played at once, as each world has a vastly different look, tone, and environmental detail.

A common issue that I've experienced in horror games is that puzzles often feel shoehorned to provide a moment's respite from the intense scares. Instead of having to do dull cliched tasks like fixing a generator, for example, I found the puzzles within The Medium to feel organic, as they often were tied to the broader narrative. When progressing through an area, you'll find the path obstructed in the real world and you'll have to delve into the world of the dead to find a solution. This is often the main template for puzzles, but they are mixed up in many interesting ways. Sometimes Marianne will have to delve exclusively into the spirit world where tension is heightened, as staying there too long can kill you.

Along with the usual mind trickery that we've come to expect from Bloober Team, there are also several stealth and chase sequences peppered throughout. The stealth sections here, despite being supported with some excellent voice work, I found to suffer from some similar problems I experienced with Observer. Besides having to watch myself ripped to shreds, there was no real sense of danger in these sections, as I could simply pick up where I left off at the last checkpoint around the corner. They also felt painfully easy too, as inching my way behind the next spot of cover and holding my breath was almost always enough to sneak my way past. Things would have been a lot more tense if The Maw was a little more proactive in combing the immediate area and trying to search for your whereabouts.

Something that I wasn't a fan of within The Medium was the heavy, tank controls and fixed camera angles. Sure, I get this was intentional to evoke a feeling similar to classic horrors such as Resident Evil and Silent Hill, but things just feel massively cumbersome. Marianne moves at such a slow pace, which makes it draining when you have to return to a previous area and scout for collectibles. Not having free control of the camera was a pain too as there were often times where there was a staircase or hallway right off to the corner of my view and I completely missed it due to how the shot of my surroundings was framed.

The Medium is one of the most cinematic and innovative horrors that I have played to date and it's easily the finest work to come from developer Bloober Team. Being able to traverse two separate worlds made for a novel approach to puzzles and its chilling narrative managed to keep me gripped for its entire duration. The Xbox One might have been barren when it came to exclusives, but it's great to see the Xbox Series come out the gate swinging with a truly must-have title. If you're an Xbox Games Pass subscriber, do yourself a favour and get this one downloaded.

HQ
Gamereactor UK
+
It's dimension hopping mechanic feels unique, its story is gripping, it feels like a true 'next-gen' title.
-
The tank controls and fixed camera can be cumbersome, the stealth sequences lack challenge.
is our network score. What's yours? The network score is the average of every country's score

Take a look at The Medium's new PS5 trailer

The new-gen title utilises features of the console's DualSense controller.

The Medium's soundtrack is coming to vinyl

The Medium is officially coming to PlayStation 5 in September

And it promises an experience "enhanced by the DualSense controller".

The Medium has been age rated for PlayStation 5

A reasonable guess would be a July 28 release date. 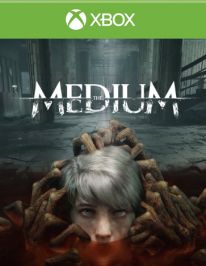