When Naughty Dog first started spilling the beans on Uncharted 4: A Thief's End, they were pretty adamant that this would serve as an end to the series, at least for the time being, but since then, and with the release of Uncharted: The Lost Legacy, they've dialed back that rhetoric. Actually, in recent interviews they've stated that they feel like the series could go on, and now the director behind The Lost Legacy has chimed in.

In a recent video, where Creative Director Shaun Escayg, Game Director Kurt Margenau, and Co-Writer Josh Scherr talk about the challenges of creating the game, Escayg says that he doesn't feel like the world is "done":

"I don't feel the world is done yet. I feel there's such a great cast of thieves, hustlers, warmongers in this world. I think there is a lot to choose from."

Would you like to see the series go on?

"Nadine and Chloe have proven themselves more than capable of picking up the reins from Nathan Drake."

Shaun Escayg leaves on good terms, hints at something being in store for him.

Watch Uncharted: The Lost Legacy as a four hour movie

Half the length of playing the full game.

Four new releases makes their way into the top ten.

Uncharted: The Lost Legacy dethrones Crash from the charts

We have a new number one at last.

The game has just launched, and we've got two hours of gameplay.

We step into the shoes of Chloe to see the new adventure for ourselves. 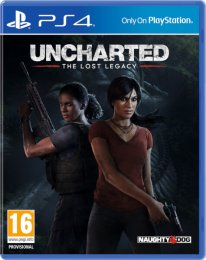