We quite enjoyed the Lego movies, whether it's Lego Batman or the first Lego Movie. They offer a sense of humour that we appreciate, and they're well worth repeat viewings. Which takes us to the video game based on the second Lego Movie. The Lego titles from TT Games have always offered a charming playfulness, lots of laughs, and a level of accessibility that means anyone can pick them up and play them effortlessly. The same goes for this one.

As you'd expect the game follows the movie's plot. Emmet and Lucy find themselves in Apocalypseburg (one of a total of seven worlds in the Systar system), and are about to tend to today's chores just as a bunch of Duplo blocks crashland in the middle of the street, they start eating stuff, and then they kidnap Lucy, Batman, and pretty much the rest of the gang. Everyone except, yup you guessed it, Emmet. And so he's left with the task of rescuing them all and saving the day. Awesome.

From a gameplay perspective nearly everything is identical to previous Lego titles. Run around and hit everything in sight to break up blocks and cash in gold and silver, help other Lego characters with minor tasks here and there, pick a boss or two apart. Rinse and repeat. Repetition is both a strength and a weakness here. It's easily digestible and will appeal to a broad audience, but it also tends to be a bit boring over longer play sessions. The basic premise is that you collect purple blocks by offering your services (break this rock or build house X in location Y). Once you've accumulated enough purple blocks a portal is opened up somewhere on the level and you can then travel on to the next world where you do the same again.

It's good fun to play, even if it's a bit routine. As you make daring jumps between asteroids or cling on to the exterior of a giant boss, it's rarely more challenging than pressing X at the right moment to continue on your path. Your character seems blessed with heaven-sent stamina and you can hang on for what seems like an eternity. The game resorts to the oft-criticised quick time event on numerous occasions too. These are often triggered in fights and result in, when the right combination is pressed, wonderfully over-the-top finishing moves. This also adds to the sense of automation and routine, however.

Given that the game is about blocks, there's a well-established building mechanic (what would a Lego game be without some sort of construction?). It's pretty automatic and you only need to choose which set you want to construct and confirm. Not all that engaging, but easy to grasp. There is also no real challenge in building the right object in the right place (the puzzles often boil down to building a specific object in order to advance), as you quickly learn what things look like depending on what is being asked of you. Once more, very accessible.

One thing we need to mention, and it makes us feel a bit bad to be honest, is the enemies. They are Duplo characters, with cute, oversized eyes, a massive appetite, and an axe to grind. As you punch these Duplo folks with your semi-circle shaped hands, they give out squeaks that kind of made us feel guilty. We know that they're the bad guys, but it nevertheless feels wrong, like punching kittens or something like that. It makes for an unusually dark aftertaste for a game of this nature. Oh well, we're sure no Duplo blocks were actually harmed during the making of this game.

Back on the subject of the game, there's plenty to do for the dedicated (plus the fact that more worlds are inbound in the form of DLC drops), and this amount of content will appeal to completionists. We do feel that it's all a bit empty and monotonous, though. It's also a bit too easy to collect enough to unlock the next world, and that prevents us from fully enjoying each location, and we felt that there was some potential left untapped here. Something positive is that there's nice variation in terms of environments, with everything from Apocalypseburg (which is straight out of Mad Max) to the Minecraft-inspired Syspocalpystar, and in between, there are several worlds that impress and feel distinct.

From a visual perspective, it all comes across as very polished. The animations are silky smooth and the same goes for the jumping plastic flames, the stiff plastic characters, and the bouncing blocks. It looks inviting and we didn't encounter any major technical hiccups during our time with the game.

The Lego Movie 2 isn't necessarily a mediocre game, not at all, it's just that, as a result of its structure and desire to please everyone, it felt a bit flat at times. In direct comparison to Lego City: Undercover, for instance, it just doesn't measure up. It comes with the same charm, and the humour is top notch (Batman stands out as the funniest of the bunch), but with its large number of automated mechanics and the game's fairly casual approach and subsequent lack of depth, it simply doesn't deserve a higher score. It's a case of accessibility taken a step too far. Still, if you're a fan of Lego games and you dial down your expectations somewhat, you will enjoy it because at the end of the day there's enough charm and humour here to turn even the most stubborn frown upside down. 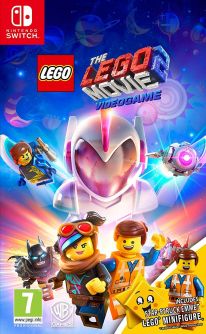