When I change tracks and blow the whistle with my cap wearing Link it's easy to spot the technological advance that has taken place in Hyrule the last few years. Horse, sailing boat, steam boat and train. I wonder what Link will handle next. A snowmobile in A Lynx to the Past? Or perhaps a hybrid car in Twlight Prius?

At any rate the shifting means of travel is just one of the signs that Nintendo are trying to keep the series fresh, and that is important given that the guiding principles of the series have remained the same for the last couple of decades. But it takes more than just new means of transportation to make an interesting and appealing game. And that's is why it's nice to be able to conclude that Spirit Tracks is more than just "Phantom Hourglass with trains".

With that out of the way, The Legend of Zelda: Phantom Hourglass, is perhaps the closest relative to Spirit Tracks. Link is still designed as he was in The Legend of Zelda: Wind Waker, and he is once again controlled solely by the stylus. And you will still go from temples to villages in other to rid the land of a naughty villain. New items help you out in both battles and exploration and there are many side tracks to spend your time on. Fans will feel right at home and first timers will be delighted as well.

At the start of the adventure we are given short briefing on what's good and evil this time around. Link wakes up (as usual) and is tasked with going to Hyrule Castle to receive an engineering degree from Princess Zelda. Everything is as it should be, there are tutorials on how to pick up items and we go for a short train ride. This peace quickly comes to an end, as evil doer possess the princess' body in order to awaken an ever bigger evil doer. Link has to save the day, and along for the ride is the spirit of Zelda, who is more than just a travel companion.

That takes us the to ride. Your train. The entire game world is connected by tracks and as we ride the train we gaze at the train in 3D on the screen below, while the upper screen shows a 2D map of the tracks and other trains. A train collision is rarely a good thing so you have to use a soft touch on the throttle and good timing. Pigs on the tracks are scared off with the whistle and further into the game you will be able to fend off enemies with a mounted cannon.

The train rides are a quaint inclusion, but given the nature of the following a track you don't get the same sense of freedom as you did sailing or riding Epona. Sometimes it's a bit boring, but just as often it is fun to collect new tracks (the tracks mysteriously start to disappear in the beginning) to find new areas. Carrying goods and people are also nice diversions...

We quickly get accustomed to the train ride and the same goes for Spirit Pipes, a panpipe Link has borrowed from Zelda as her mouth and fingers are preoccupied somewhere far away. Musical instruments have always been a part of Zelda games and in Spirit Tracks it is the most realistic rendition of playing an instrument thus far in the series. You blow into the microphone and use the stylus on the pipes on the lower screen. This procedure is repeated at key moments throughout the game and Link learns new melodies as he travels. It's nice, but you will look ridiculous if you happen to do it in public.

Other items are as classic as they are necessary - sword, bombs, and boomerang are used on enemies and the best puzzles or bosses. There are some new weapons, but I'm going to let you discover those on your own. I can, however, say that one of the new weapons is amazing fun to use, while another one is mostly frustrating.

Speaking of frustration. In the predecessor The Legend of Zelda: Phantom Hourglass, the most annoying thing was undoubtedly the Temple of the Ocean King. Extremely repetitive and filled with phantoms it was a place we return to and suffer through trial and error. There is a similar place in Spirit Tracks called The Tower of Spirits, but there is no need to worry. It's not the same frustrating and repetitive experience. On the contrary this tower is one of the stronger points of Spirit Tracks.

You advance a few levels at a time and outsmart the phantoms with the help of Zelda who can possess them. Zelda is given different abilities depending on the type of phantom gear you "hi-jack", she can do things like carrying Link on her shield, turn herself into a wrecking ball, and light up dark passages with a torch. The higher the level in the tower, the higher the demands are on your ability to multi task and your reactions as you switch between Link and Zelda. Good news for those of us who have found some temples a bit on the easy side, and it is nice to see Zelda have a more active role for once.

The controls are logical and easily accessible, but much like the case was with Phantom Hourglass I sometimes miss the classic controls. It creates a distance of sorts not having to first walk over to the pot in order to break it rather than just tapping it. At times the controls also feels somewhat imprecise when the game thinks that I'm poking at one enemy while in reality I'm trying to poke another one. Frustrating when you don't have much life left.

If you were to grow weary of the adventure (no likely to happen until you finish it) there is Battle Mode. Up to four players can battle it out as long as one player owns the game. The aim is to collect crystals, while preventing your opponents from doing the same. At your disposal you have bombs, traps and phantoms. I grew bored of it rather quickly, and I don't think you're likely to spend much time on it either. It made me think of the old Four Swords Adventures on Gamecube, but sadly it's not up to that standard.

Before I finish the review I must mention the music, something we have grown accustomed to praising in every new Zelda title that comes along. It is rather telling that people had created Youtube clips of themselves performing the intro music from Spirit Tracks months prior to the release of the game. Once again the music consists of familiar themes in new and interesting variations. Spirit Tracks is made up of a spoonful of Latin rhythms, some Western, a great deal of Zelda and soothing sound of steam train rolling along its tracks. The same high quality is also apparent in the sound effects.

As I reach the end station with Link and I watched the credits roll by I feel very happy with this little adventure. It is easy to forget that this is actually a portable game. That a small cartridge can contain all of this is mindblowing. Ever since Link's Awakening the portable Zelda games have been an excellent addition as we await the new chapters of the main saga on stationary consoles and Spirit Tracks is no exception. An excellent game that you should play every time you go somewhere by train!

Gamereactor UK
+
Expansive and charming adventure, wonderfully challenging puzzles, cosy graphics and music, that special Zelda feeling.
-
Semi-boring train sections, certain weaknesses in the controls.
is our network score. What's yours? The network score is the average of every country's score

Link is back for another adventure and this time he takes the train. Jonas Elfving reviews Spirit Tracks...

The Legend of Zelda back on track

The Legend of Zelda continues 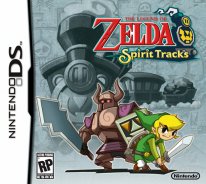