But never had we the need before to associate the following with Link's adventures: creepy, unsettling. Outright disturbing. And all this from one encounter with a character that outdoes Ganon in the complete bastard stakes.

It comes rather as a welcome shock. We've just been introduced to the central villain of Skyward Sword, a meeting of words and swords that lasts but a few minutes, but who's charismatic presence lingers long after his escape. His personality holds such a sinister edge, that is, in context of a Zelda title, downright horrifying. if only his outfit and hairstyle didn't initially mark him out as a bit of a plonker, we'd be hailing one of the all-time villainous greats to come out of Nintendo's stable of memorable characters.

We stumble into him right at the start of one section of Nintendo's three-part demo, as he attempts to break down a door in a scene that seems to be the climax of a dungeon.

Far from the hulking presence and brooding stare of the franchise's main threat Ganon, Ghirahim, as he's named, seems at first glance foppish. light hair dropped down over one eye, cutting a slim figure that suggests manipulative behind-the-scenes trickster rather than combat-trained killer. But then he speaks.

His text-based monologue is full of the usual trappings of any series villain before him, but there's a delivery that's slightly off-kilter, troubled. A slight emphasis of sinister madness that increases when he teleports behind Link, grabbing him to whisper in his ear, and then, his unnaturally long tongue lashes out, glee plain on his face. He calls for bloodshed, and for the first time in far too long in the history of this series, we feel a stab of fear as the cut-scene curtain is pulled back for a boss fight.

For all intents he's Link's darker half - an expert swordsman, yet capable enough with just his bare hands as demonstrated in the following sequence that both highlights the Wii Motion Plus technology and how different Skyward Sword is from its predecessors.

We hide our worry behind a grin. It's not long before it grows wider; we're sweating from learning Ghirahim's patterns, yet partly due to that fact, and partly due to the Motion Plus controls, we're having a blast with the workout. It's passing strange that for a franchise so heavily entwined with the use of a legendary sword and its powers, this is the first time we feel like we're partaking in a proper sword-fight.

It's a brilliantly executed mechanic. A later playthrough of a dungeon grants us the time we haven't here to revel in Link mirroring our movements with his sword arm, swinging the blade in slow or fast arcs vertically, then horizontally. Matched with the sharp punch of raising your other Nunchuk-grabbing fist forward to hike your shield protectively in front of you, you feel completely absorbed in the action.

Ghirahim's dominance in the fight is unnerving at first; we've dealt with hulking spiders, horse-riding demons, even a power-mad humanoid pig, but nothing is more disconcerting than an attacker who dispels his sword and nonchalantly paces towards you unarmed, shaking a finger. Sense would suggest nut-job, battle tactics suggest trickery. Terrifyingly, both are wrong.

A quick swing sees him catch the Master Sword in his fingertips, and if you don't shake his grip he'll disarm you, only to attack with your own weapon. The feeling of both safety and power that comes from wielding that steel is shattered in an instant, and as Ghirahim casually tosses the sword over his shoulder and resumes his relaxed pacing towards you, there's unsettled panic - what could he do with those hands alone if he gets within grabbing distance? We decide not to find out, retreating and circling until we can retrieve what has turned from empowering weapon to safety blanket.

His pattern changes, mixing two attacks in turn with a dose of teleportation. First he launches a set of glowing daggers, which form into a line before firing straight for you. Then he kneels, only to thrust forward, with only a shield block the only way to avoid damage as a sword materialises into his hand. Yet when you swing to attack, he brazenly leans down and to the side to avoid the hit, before leaping back out of your sword range. Pace back yourself and he'll disappear for a second, only to teleport right beside you and attack.

The solution to our survival only comes after a criminal amount of hearts have been chopped off the screen. There's a split-second pause when he teleports right beside you gives you opportunity to score some damage, though you have to be fast to turn camera and lunge in the right direction as he materialises from any side.

He soon is weakened enough to collapse, and one short cut-scene later and we're dumped back into the main demo menu, but the grin remains plastered on our face. It's amazing that the extra enjoyment gained from refining one particular mechanic in the series so thoroughly.

We get the chance to test our sword-work in a dungeon, as we tackle goblins and a skeleton warrior. The former switches their axe from hand to hand, forcing us to change our swing to compensate. The latter is a whirling devil of dual swords, changing the guarding position with each swing, and what results is a action-based puzzle, as we change our attacks to thrust into the ever-changing blind spot between the blades.

Even while we get new touches on familiar setups - the mechanical Beetle item a much more versatile version of the boomerang, letting you steer it into small corridors to hit switches, bird-flying replacing Epona - its the sword-fighting that brings something innovative to the tried and tested formula, and instantly every preceding Zelda seem over-simplistic as a result.

We're left hoping to see properly fleshed out gameplay elements that use the mechanic cleverly, and feel incredibly excited for Skyward Sword. But the big question still remains: can it topple the original 3D Zelda adventure? 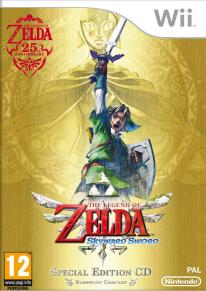