Ever since The Wind Waker and Twilight Princess re-released on the Wii U with cleaner HD graphics, fans of Nintendo's 35-year-old adventure were looking forward to seeing Skyward Sword receive the same treatment. It was, after all, the last '480p' entry they had left to be ported, but the Wii original was so unique that its modern adaptation had to go beyond the visual upgrade in several regards. Now that The Legend of Zelda: Skyward Sword HD is finally launching on the Nintendo Switch a decade after its initial release, I'm happy to report that there's more to this remaster than meets the eye.

But first things first, the graphics. I did my homework -and I'm sure many of you reading this also have done the same- and played some parts of the Wii game to ready myself for this review. And I have to say that, while no Wii game aged particularly well in terms of visuals, Skyward Sword was definitely one of the worst cases. It wasn't just a matter of its sub-HD resolution causing jaggies galore, but also the sacrifices the dev team had to make in order to keep the game running. Chopped world aside, the draw distance was reduced considerably, while a water-coloured bokeh effect struggled to conceal the low-res elements. Moreover, when the game was outputted to an HD screen by means of a digital interface, its picture noise and artefacts became painfully notorious.

Now all that is gone. The fivefold HD resolution (1080p on TV, 720p on handheld) paints a much crisper picture on screen, with both scenery and characters featuring soft and defined edges (not to mention map and menus no longer looking like a blurry mess). At the same time, the significantly increased image quality allows for more vivid colours, which goes well with the slightly more contrasted lighting used for this version. Furthermore, the depth of field has been increased, and while the water-coloured bokeh remains there as an artistic staple, it now kicks in much further away, allowing us to enjoy the vistas and to detect elements of interest in the distance.

This makes what was a beautiful artistic work finally come to life as it was meant to look originally. Granted, you can spot its low-poly nature, or how some textures here and there didn't upscale properly, but it's a very decent restoration effort that takes a classic and even renders it playable for many. And if you add the duplicated framerate (now running at smooth 60 fps) to the mix, the result not only is pleasing to the eye, but also to a motion-based gameplay experience where going with the flow is key.

Because how Nintendo was going to handle controls was, apart from the graphical upgrade, the main and most controversial point of this remaster. The Wii game was the epitome of its generation's motion controls, a full, deep, 'serious' if you will, adventure, designed around the belated, but highly anticipated 1:1 tracking provided by the Wii MotionPlus technology. At the same time, it is true that many fans were totally uninterested in that control method, so much so, they wouldn't touch this game with a Deku stick unless Nintendo implemented traditional controls. And here we got both.

The motion actions with the Joy-Con controllers feel slightly better now. The tech has seemingly evolved ever since, but perhaps it's the aforementioned 60 fps framerate that makes the difference. Swinging your sword, rolling and scoring a basket with your bombs, or manoeuvring your beetle and your loyal Loftwing seem more responsive and less laggy, even if the difference is quite minimal, as I've been able to compare. You still need to re-calibrate the centre every now and then (as happened with Super Mario Galaxy's gyro-based pointer recently), and I run into synchronisation issues with what looks like a faulty Joy-Con, on the welcome screen menu. But other than that, it feels as great as it is a truly unique game with multiple puzzles and combat based on what you physically do with your hands, an experience that we won't see repeating itself unless we go fully VR. Oh, and a pro tip: you better use the Joy-Con strap add-on for much better grip and ergonomics, even if the shape itself won't come close to the Wii remote's.

And, are those button-based controls any good? Well, I would personally recommend everyone give the motion controls a try, as a good part of the whole meaning, enjoyment, and purpose of this game will soar away without them. That being said, the solution proposed for the traditional controls is good enough, with the right stick imitating your sword swings in every direction. It takes a while to get used to, as you don't press a button to attack, but it's fast and accurate, perhaps "too much" when you compare it to your performance controller in hand, if you know what I mean.

Now, there's a couple of caveats to keep in mind here: if you play motion on TV and then -obviously- buttons on handheld, the transition isn't really seamless as there are some changes in the layout to rethink before feeling like home. In other words, making the console-defining switch gesture isn't as natural as with most of the hybrid system's catalogue.

The second thing to keep in mind is much, much more important, as we're talking about a game changer here. Seeing how conveniently placed the right stick is when you opt for motion controls, Nintendo has mapped to Joy Con R's stick what probably is the most welcomed new addition to this remaster: the ability to move your camera freely. Remember it wasn't possible on the Wii as you had to keep locking it like in the old N64 days? This enhances the game significantly, making exploration feel nicer and more cinematic, while also aiding you with motion aiming in first person. Once you realise, you won't stop adjusting your view. With the new button controls you must press L as you tilt the stick, and there's an alternative motion-based camera (heh, the irony) that just isn't half as good.

Other little tweaks and touches we appreciate are as subtle as printing the names of the speaking characters on screen, having both controllers rumble depending on the action, fast-forwarding dialogues, or seeing how the game saves as soon as you walk past a bird statue which, believe me, also makes the experience flow better.

The rest is history. The game itself didn't age as well as it was the last of its kind, a tired old 3D Zelda formula that was sealed for good after the eruption of Breath of the Wild. It's a heavily interrupted experience that takes some time to get going (despite a few added shortcuts) only to then face other pacing and linearity issues, along with some decisions as annoying as Demise's appearances. However, it also tells a beautiful story, which is more character-based than usual (Impa we love you), it includes some brilliantly smart boss and dungeon designs (Lanayru, we're looking at you), and it brings back an approach to the adventure genre that is rarely seen nowadays. It's 50+ hours of inventive puzzle-solving and rewarding combat, and wielding the sword feels as exciting as ever.

HQ
Gamereactor UK
+
Free camera with Joy-Con. Good tech decisions make for the visuals it deserved. Some designs remain as clever 10 years later. Lovely, self-aware origins story. Distinctive motion controls. Decent button alternative. Smoother with skippables and shortcuts.
-
Switch control scheme doesn't transition as seamlessly from motion to handheld. Fly to the skies and back at any point feature is behind Amiibo paywall. Tired aspects of the old formula didn't age well. A few ugly interpolated textures.
is our network score. What's yours? The network score is the average of every country's score

This former Wii exclusive takes place right at the start of the series' timeline.

UK Charts: Skyward Sword climbs its way to the top

Watch us take on two different bosses in The Legend of Zelda: Skyward Sword HD

The HD remaster of the Nintendo Wii title launched today! 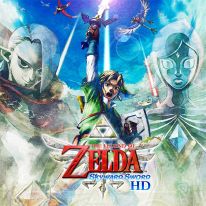