Project Warlock II, a retro-inspired shooter with a distinctive visual style, has had its Kickstarter delayed from June 29 to an unconfirmed time in August. The reason behind the delay is that the developers hope to further "polish the game" for when it lands in Early Access during Q4 2021.

"Hey everyone! We need a little more time to get everything for the Kickstarter together and to polish the game for the Early Access," said Kuba Cisło of Buckshot Software. "We're sorry to keep fans waiting, but we want to make it truly special. We're confident the wait will be well worth it. In the meantime, fans of retro fps should check out the amazing Kickstarter for First Person Shooter: The Definitive FPS Documentary - it's launching today!"

If you are unaware, Project Warlock II was first revealed during E3 2021 and it's said to continue after the events of the first game. Just like its predecessor, it's said to channel the same energy as classic shooters such as DOOM and Quake and it features elements of magic. According to a press release we received, Project Warlock II will unfold over three episodes, and there will be three playable Warlock characters known as Palmer, Urd, and Kirsten.

You can request a notification for when the Kickstarter campaign goes live here.

The developers need more time to "polish the game for Early Access." 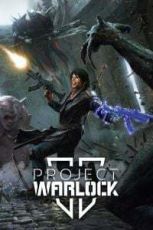