With The Last Windmonk, Berlin-based Studio Fizbin has delivered us a sequel to 2013's quirky original, The Inner World. Despite the serious subject matter that underpins this newly released game, players can expect a decent dose of humour to go with along with it, and this is an adventure game that has been made to appeal to players of all ages. The question is, then, can the studio successfully continue the story of the flute noses?

The Inner World: The Last Windmonk is a point and click adventure that tells a story of social exclusion. For thousands of years, the flute nose dynasty has protected the inhabitants of Asposia from danger, secretly using their musical noses to keep the wind flowing through this unique world and protect its inhabitants. After the Asposians uncover the existence of the flute noses, they started hunting them down, out of fear of the unknown. A Conroyalist called Emil takes control and makes it his mission to destroy their mysterious protectors. Just as in the first iteration of the series, we take on the role of Robert, the official heir to the flute nose throne. He has been petrified since the events of the previous game and doesn't understand this new world ruled by Conroyalists. With the aid of his friends, Robert has work to do if he's going to uncover the truth behind the accusations and defeat the forces of evil once and for all.

The scenery in The Inner World: The Last Windmonk is decorated with the red flags of the Conroyalists, and they bear the symbol of their leadership: the inverted pretzel (because Emil is a baker by trade, naturally). Amongst the wash of red, we find posters with crossed flutes and propaganda messages that read: "The flute noses bring disaster" and "The flute noses want to destroy us". Therefore Robert has to camouflage his nose so that his true identity remains hidden. We also have to welcome Conroy's followers with "Hail Conroy" in order to avoid attention. The Inner World doesn't hide its strong political message but, at the same time, the developers emphasise that they are not referring to a specific event, that this isn't a game about current politics, but rather a more classical representation of something altogether more obvious. Despite the important message, though, the main focus is on slapstick humour and having fun.

Across a total of six chapters, we puzzle through the lovingly designed landscapes of Asposia. Robert doesn't have to go on this adventure by himself though, and joins forces with his friends Laura and the somewhat grumpy pigeon Peck. The relationship between the three characters is very straightforward. Over the course of the game, Robert learns to play special songs on his flute nose which influence objects in the environment. Laura is a little bigger and stronger than the feeble Robert which means that she's usually responsible for lifting heavier items. Peck, on the other hand, reaches distant objects that are out of range for the other two. As we explore and solve puzzles we can change between the three characters at any time, and a certain rhythm reveals itself over the course of the story.

The overall standard of a point and click adventure is determined by its puzzle design. If the puzzles are too simple players don't get the feeling of challenge they desire, but if the mysteries are too hard to solve they will stop playing. In The Last Windmonk the difficulty of the puzzles varies greatly during the course of the story, and every now and then we got stuck on a different challenge. They differ greatly from each other, though, and are always unique in their design. However, we did find that some solutions are fairly unpredictable, confusing even.

Fortunately, Studio Fizbin has taken these occasional spikes in difficulty into account. The Asposic hint system from the first game is available in The Last Windmonk as well, and provides players with tips that will help them with their current objective. Anyone who sees themself as a true point and click veteran will probably never make use of this mechanic, but players who need a helping hand will find a loyal companion in terms of guidance. How much help you get is completely left to you, because the number of tips received depends on how often you ask for assistance. The solutions start by suggesting where to go next, while the last hint tells you exactly how to solve the riddle. .

More surprisingly it was the DualShock 4 controller which repeatedly annoyed us while we played. While you're able to click on everything when playing with a mouse and keyboard on PC, on console we're forced to go through every single available object in one particular screen. This means that we often accidentally skipped important objects because we clicked too fast and thus had to repeat the procedure. During the puzzle sections the interactions surrounding repetitive tasks are also very cumbersome.

Although a couple of things can be tedious, overall The Inner World: The Last Windmonk provided us with a lot of fun. The game is between eight and ten hours long (which is comparable with its predecessor) and it offers just as many funny ideas as the original did before it. If you're stuck during a somewhat strange puzzle it might be tempting to rely on the convenience of the help system, and seasoned point and click aficionados should probably stick to the PC/Mac version if they want to avoid the cumbersome console controls. Still, despite some problems, the charming cast of characters won us over by the end, and Studio Fizbin has delivered an experience that will be fun for gamers of all ages thanks to its uniquely designed world.

Advertisements
Gamereactor UK
+
Lovely designed world and characters, fluent change between the three characters, diverse puzzles.
-
Controls need its time to get used to it, some solutions are strange.
is our network score. What's yours? The network score is the average of every country's score

"The charming cast of characters won us over by the end."

Both adventure games are coming to Nintendo's console in August.

We talk about The Inner World 2 with Studio Fizbin

Developer talks to us about the upcoming adventure sequel. 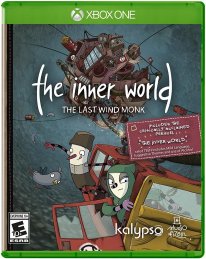