Crash Bandicoot 4: It's About Time looked and sounded great when it was officially unveiled last month, but gameplay is always the most important part of a platformer like this so I didn't dare to get too excited back then. The developers got me excited, however, when they said that this time traveling adventure really is a real sequel to Crash Bandicoot 3 where the series' well-known precision platforming has been improved upon by adding new abilities, making the levels more diverse and generally make some modern quality of life changes. Fortunately, Activision and Toys for Bob were kind enough to let me play through three of the game's levels, and here are some of my takeaways after playing.

It has style
The one thing that was clear from the get-go even in the reveal trailer was the new visual style. I think it looks great in the trailer and works even better in practice. Whether you're exploring the 11th Dimension's snowy fishing village filled with zombies or you're getting chased by a dinosaur in the colourful Eggipus Dimension - everything just pops and looks cool. Many games have tried taking inspiration from Looney Tunes, but few succeed as well as this. Each world is filled with goofy details, and Crash's facial expressions and reactions to different scenarios are perfectly exaggerated. Enemies are kind enough to perish in funny ways, which should make younger players forget that they just watched someone get burned to a crisp in lava, and Walter Mair's music does a great job of highlighting where you are and what you're going through. Crash has always had plenty of attitude but It's About Time takes it to another level.

Diverse and interesting levels
Speaking of levels. While the core level design still feels like classic Crash, the three stages I've played in Crash Bandicoot 4 show how new hardware can improve upon the formula by making them bigger, more elaborate, and increasingly diverse. Take Dino Dash as an example: you'll start the level following Crash's back, but it doesn't take long for it to change to 2D platforming for a while before seamlessly switching to the classic chase camera where you're running towards the screen as a T-Rex tries to show you something cool down its throat. Changing perspectives is a nice way to keep things fresh, but it's nothing compared to the gameplay changes.

Crash and Coco
In their time away, the iconic duo hasn't just learned to grind on railings and climb on vines. They've also learned to use new kinds of masks, and the two I got to play around with spiced things up. Kupuna-Wa, aka the time-mask, allows you to slow down time, something that comes in handy if you need to jump on falling chunks of ice to cross a gap, touch a Nitro crate without blowing to bits, or get to special crates that vanish shortly after you've activated something elsewhere. Meanwhile, Lani-Loli is a mask that allows you to phase certain objects in and out of existence to either remove obstacles or add something helpful such as a crate. These aren't time-limited like Aku Aku either. They're instead available from one specific part of a level to another, giving you time to try them out and maybe use them to find hidden crates and secret areas. But wait, there's more.

A madman's revenge
I also got to play as Neo Cortex, and his challenges are very different from those faced by the Bandicoots. Not being able to double-jump, you're instead forced to use a dash to cross gaps and such. This was nerve-racking at first because it's so fast and I didn't know how far the move reaches, but it didn't take long before it felt like second nature. The same goes for using his ray gun to transform enemies into solid or gelatinous blocks, which works exactly as I'd hoped and rewards creativity. For example, in an area where there are birds on guard, you might need to transform one of them into a solid, yet levitating block so you can get across a gap. On the other hand, turning it gelatinous might make it bouncy enough to get you up to another area where some sneaky crates or a hidden gem are hiding. Hopefully, the rest of the game will implement stuff like that even more.

Time waits for no marsupial
Not every addition has been as great as I'd hoped, however. Let's start with the nit-picky stuff. Where it sounded cool to play as Neo Cortex and show us why certain things happen in the Bandicoots' levels, the different takes on Snow Way Out left a lot to be desired. Neo's version was far shorter, and it turns out that you switch back to Crash after reaching the part where Neo's actions have consequences. This leads to you playing through the last part of a level you've already played as Crash or Coco before just with a few new obstacles. First concern: why swap perspectives like this and force me to play through a level I've played before? Second: how does it make sense that there are new obstacles and tweaks to the level if this is the same time-line? Sure, it makes the level feel a tiny bit different, but still ends up being too similar and confusing, especially if you're the kind, like me, who might spend too much time thinking about the logic and consequences of time-travel.

How it handles
Then we have the controls. Hate it or love it; Crash Bandicoot 4: It's About Time feels like classic Crash, which means that some of you will find the controls somewhat erratic. Including a circle beneath both yourself and enemy characters to indicate depth is all well and good, but that doesn't help much when you don't have enough time to react when your input doesn't quite match up with what you expected to see on the screen and you fall short of your target and get stuck on something. Again, this is mostly just a warning for those of you who aren't comfortable with how the Nsane Trilogy controls, as fans will easily be able to perform complex moves using the tools offered in It's About Time.

To put it simply: judging by this not yet final version of the game, Crash Bandicoot 4: It's About Time seems like a worthy sequel that blends the core components that we've always loved with new and modern improvements that are sure to bring new players to the beloved universe as well. I've got a couple of concerns but not enough to dampen my enthusiasm for this long-awaited return, which is due to land on PS4 and Xbox One later this year on October 2. 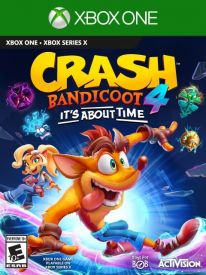