When playing EA's golf sim, Rory McIlroy PGA Tour (previously known as Tiger Woods PGA Tour), you're able to unlock, develop or simply buy stuff to make yourself a better virtual golfer. The Golf Club ignores all this and lets you be exactly as good as you can be, without any accessories.

The only way to become a better golfer in The Golf Club, is by playing, playing and then playing some more. You play as your own created golfer, and not a pro like Rory McIlroy or Rickie Fowler. Your golfer doesn't hit their drives extra yards because they train more or buy better gloves, drivers or shoes. If you want to add spin to your shots, you simply need to be precise. There are no shortcuts to boost your abilities.

Some will probably say this makes the game a bit plain, but we quickly realised that this is how we wanted it to be. Of course it would be fun to play with the exact same club set you use when you are out golfing in the real world, without necessarily gain extra boost from it. But if you think of all the money the developers at HB Studios would have to spend to acquire these licenses, the low price for this game makes it worth playing without those kind of extras. The Golf Club focuses on one thing, and one thing only: golf.

Since the game has been out in the wild for a while already, there has already been a lot of updates, patches and add-ons. This has improved the game over time, and we do have a lot more fun now than when it first was released. In the beginning you could only play single rounds, either alone or against ghosts of friends or complete strangers. This wasn't necessarily bad, since thousands of courses were available early on. Season mode was an update that was added recently, and makes it even more fun to play alone. You start from scratch and work your way up to the Pro Tour, with the competition becoming harder and harder the closer you get to the top.

As we mentioned, there are a lot of courses available, and the reason is quite simple: everybody is able to easily create their own course with the Greg Norman course designer, where you're able to build a beautiful course in just a few minutes. You can of course spend hours and hours to make your course just the way you want it with all the details needed. All created courses works on every platform (PC, PS4, and Xbox One), which makes for a massive number of options.

Since there are no officially licensed courses available, you won't be able to play courses like St. Andrews in Scotland or TPC Scottsdale. But most of us are probably sick of playing in the same places we find in every year. Augusta National is a beautiful course, by all means, but it gets tiresome to play it over and over again. We can guarantee that you will be playing The Golf Club for many, many hours without ever having to worry about having to play the same course twice.

When we look at the gameplay itself, it takes some getting used to. You have to measure everything in every stroke. The wind, how the ball lies, and the distance to the pin, assessing all this is essential before you even hit the golf ball. You can't add extra spin while the ball is in the air, like you can elsewhere. The "super-drive" you could get from going mental on the X-button while winding up, is no longer an option. You decide how you strike the ball, and after you hit it, it's out of your hands just like in real golf. You don't start off as a pro in real life, but you get better the more you play. Just like you do in The Golf Club.

But how are you able to measure if you're improving? Well, again as we do in real golf, by a handicap rating system. After playing five rounds, you will establish a handicap rating. From here you increase or decrease your handicap score depending on how well you're playing. This makes it possible for you to defeat your friend in a game, cruising down the fairways, even if they have played the game much longer than you. The Golf Club gives you endless hours of fun on beautiful prepared fairways, just make sure you stay out of the rough.

Gamereactor UK
+
+ Course editor and thus a huge number of courses, focus on skill.
-
- No licenses for fans of the sport to enjoy.
is our network score. What's yours? The network score is the average of every country's score

REVIEW. Written by Daniel Andersen on the 3rd of October 2015 at 11

"Finally a golf simulator that actually appreciates the sport for what it is." 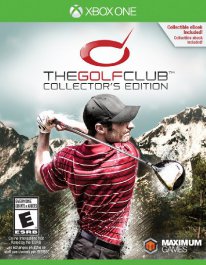