Guy Ritchie's latest movie is a tale packed with gangsters, humour, cockney slang, action and everything else we've come to expect from the British director. The initial scene kicks off with a characteristically high tempo, bringing the very essence of its director into the spotlight and at no point does this pacing slow down except maybe for when the movie's narrator, Fletcher (played by Hugh Grant), drops a hypersexual comment. Soon thereafter, however, the film is back on track where someone is laughed at, a stereotype needs insulting, or an unfortunate individual gets thrown out of a window - rinse and repeat. The style is familiar, both in regards to the cut, the pacing, the role types and, above all, the dialogue. The writing is top-notch, although it's primarily addressed to Ritchie fans. It's a great example of preaching to the choir - those who are already fans will love the director even more, while those who aren't big supporters of the aforementioned identifying features and tropes won't find much here to change their minds.

The movie is, as we mentioned, narrated by Fletcher (Grant) who is a flirtatious and at times charming journalist who has dedicated himself to American gangster Mickey's (Matthew McConaughey) criminal activity and his desire to sell off his marijuana empire. The plot of the film is not only conveyed to its viewers, however, it's also delivered in real-time to Mickey's henchman Ray, played by Charlie Hunnam. The fact that the narrative is shaped and brought to life through this eccentric character adds to the film immensely, especially considering the fact that we also get all of Ray's annoyed reactions to the exaggerated and drawn-out narrative. Thus, the narrative works on several different levels, which is sure to pierce the hearts of film lovers.

It's a lot of fun, the costumes are ugly, and the set designs cheap and blurry to look at. Everything seems to be turned up to eleven so as to not risk the viewer missing a beat. The whole thing is really in-your-face and unsubtle and the viewer doesn't have to think too hard to be able to keep up. All of the complicated twists and turns are explained continually without making the viewer feel stupid and it's extremely refreshing. All you have to do is sit back and enjoy the ride.

Although the storytelling initially brings some distance to both the plot and its characters, it's something you get over relatively quickly and once you have loosened up a bit and started laughing at the inappropriate jokes, you start appreciating how the narrative is designed. The movie has a very entertaining and smart way of keeping its fast pace up, which at times is reminiscent of Michael Peña's summaries in the Ant-Man films. It's most likely difficult to enjoy the film to its fullest if you don't like the director's style, but those who do and decide to hop aboard are in for a fantastic trip. It's one of the best movie experiences we've had in a long time and it's hard to find anything to criticise besides the fact that it's not for everyone and that only one of the main characters is a woman (which, again, is typical Ritchie).

The list of supporting cast is top-notch too. There are no bad storylines, minor or major, because every role is incredibly well-written and equally as entertaining. Michelle Dockery does a great job as "Cockney Cleopatra" (as described by Fletcher), as does Jeremy Strong as an American Jewish billionaire and Henry Golding as a Chinese-Cockney up-and-coming gangster. All actors deliver solid performances and when Colin Farrell is added to the mix, it instantly gets elevated. Farrell, Grant, and Hunnam, in particular, contribute immensely to the film's endless amount of charm. Grant has truly aged with grace and has switched the rom-com trope out for flamboyance and perverse characters and it fits him like a glove.

In the same way that Quentin Tarantino has built up a repertoire that has become its own genre, Guy Ritchie manages to do the same here. In fact, this is the most Ritchie movie of them all.

MOVIE REVIEW. Written by Mathias Uttrup Østergaard on the 5th of March 2020 at 16

Guy Ritchie has gone back to the genre he knows best. We review the star-packed The Gentlemen. 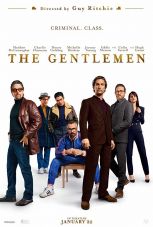