The Falconeer is a startlingly-ambitious project that caught my eye when it was first unveiled to be part of the Xbox Series launch lineup during July's Xbox showcase. Crafted by one lone developer, it sees players ride on the back of powerful warbirds and engage in heated battles over the skies of a gorgeous fantasy-inspired location. Being reminiscent of titles like Star Fox, it certainly stands out from the rest of the console's launch line-up, and because that, I couldn't wait to get stuck in. Luckily, I was able to gain an early look before launch and thus I sunk a few hours into the opening handful of chapters.

The Falconeer's story unfolds in a wartorn world known as The Great Ursee, an area that sees several warring factions separated by long stretches of ocean. Without spoiling too much here, each chapter sees you take command of a different faction and showcases the land's struggle and lore from multiple perspectives. The characters here are voiced and that helps to convey the different distinct attitudes and personalities of the groups that you'll encounter. There are no cinematic cutscenes, however, and instead, each character just communicates through bubbles on the screen - a nod to the game's modest indie status.

The intense dogfights were easily the highlight of The Falconeer for me. There's a great sense of momentum and speed here, as you need to dash, dive, and dodge roll constantly to avoid incoming fire and best position yourself for your next attack. The controls felt easy to grasp, and everything is simple in terms of keeping track of your target, as you can just press B (on an Xbox One controller) to turn your gaze to their location. The airborne threats that I exchanged fire with I found to be really creatively designed too with soaring manta rays, dragons, and steampunk-inspired battleships all looking to send me hurtling towards the ground.

What I didn't enjoy, however, was how the main quest boiled down to the same core objectives: shooting down pirates, flying across the sea from point A to point B, and escorting a ship safely across the waves. Granted, I haven't played the full game, but this is what my time with The Falconeer mainly consisted of, and I wish there had been other types of gameplay to help break things up. The missions themselves aren't forgiving either - if you find yourself gunned down during the last objective or if you accidentally land on an outpost you're flying past then you are forced to start completely over.

Outside of the central missions, you are free to soar across the open world to discover landmarks and can also undertake smaller side objectives to earn some of the game's currency. Leaving your flight path and doing a spot of exploration and sightseeing was a real treat, as the open-world here is gorgeous and it was relaxing to be able to roam freely. Disappointingly, the side-missions that I experienced were just more of the same repetitive tasks from the original quests minus the added snippets of the story in between.

The perk of doing these side quests though is that you'll be able to use your earnings to purchase new types of ammo and items that enhance your bird's skills. Your bird has several slots for Mutagens, and here upgrades can be purchased and equipped to improve certain abilities, such as your overall weight and agility. The ammo you can equip has different effects too, with fire pots having an increased chance of setting foes on fire, and acid pots slowing down enemies temporarily. I really liked having the flexibility to customise my warbird, as it had an RPG-like element to it and that allowed me to adjust my attributes if things weren't running too smoothly.

Despite not being able to experience it in its full 4K glory (my PC wasn't quite up to par), The Falconeer still looked stunningly gorgeous with its dynamic weather system and calming selection of colours. I couldn't help but be distracted by sights midflight, such as the golden glow of the sunset piercing through the clouds and the violent crashing of the waves during a thunderstorm. The world really does feel alive and rapidly changing here, which makes it all the more surprising to believe that this is the work of just one lone developer.

Whilst I came away with mixed feelings on The Falconeer, I think it still has redeeming qualities and could be an interesting addition to the Xbox Series launch line-up with some jaw-droppingly beautiful environments and intense dogfights that are filled with energy. I did, however, find its main quests to feel rather repetitive and its lack of checkpoints were a cause of minor frustration. For our final impressions, you'll have to head back when The Falcooner swoops into action on November 10, 2020, on PC, Xbox One, Xbox Series X, and Xbox Series S.

The Falconeer recently swooped into action on PC and Xbox and we took it out for a test flight.

Defeat the Kraken in new The Falconeer update

The update is completely free and can be downloaded now.

Epic launch trailer for The Falconeer to Xbox Series X

The Falconeer gets another gameplay trailer called 'The Free & The Fallen'

And here are the four factions you can choose to side with.

With the Xbox Series launch firmly in its sights, we took to the skies and tried the new aerial shooter.

The Falconeer will launch November 10 alongside Xbox Series

Ready to take a spin on the sky?

The Falconeer to be released day one for Xbox Series X

Tomas Sala's action-RPG The Falconeer will hop on the next-generation Xbox train on day one. 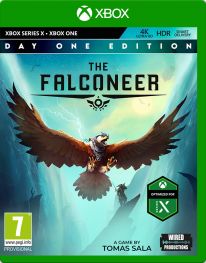