Popular indie prison-break strategy game, The Escapists, is getting jolly with the announcement of its free-of-charge Christmas DLC; Santa's Sweatshop.

The new DLC includes a brand new level where instead of being imprisoned in jail, you're stuck in the North Pole forced to make toys for all the nice children around the world. After twenty years of cruel labour it's time to escape his workshop and walk away for good.

The fresh expansion gives players a fair amount to play with; bundled along with all new items, jobs, characters and dialogue to really get into the Christmas spirit, there's a new soundtrack to make your elf escape to.

Santa's Sweatshop will be released across PC, PS4 and Xbox One on December 8.

REVIEW. Written by Christian Gaca on the 9th of February 2015 at 16

"The game may look basic, but it's built on solid foundations and a great gameplay hook."

The Escapists heads to Nintendo Switch

The Escapists are busting out of Xbox 360

The Escapists getting Santa's Sweatshop DLC

The Escapists DLC has you escaping a villain's lair

Escape from Alcatraz in the new DLC for The Escapists

The PS4 version of the prison sim is coming soon.

Team 17 brings The Escapists to Xbox One in February 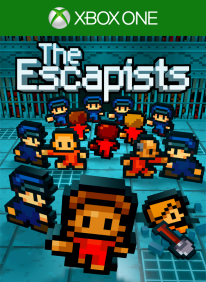 Stealth Inc. 2: A Game of Clones

The Escapists: The Walking Dead