The Tokyo Tour for Nintendo's mobile game Mario Kart Tour has just arrived on Android and iOS devices, bringing new and nostalgic tracks - including the fan-favourite Rainbow Road - but it turns out that's not all that's included.

As reported by Eurogamer, it's not only tracks and car parts you can get with the update, as this also adds the option to buy Diddy Kong.

You can unlock characters, parts, and tracks via the gacha-esque system in the game, but you can also pay to get things straight away, although Nintendo has raised eyebrows with the prices.

To get the Rosalina Pack, for example, you'll need to pay £19.99, giving 45 Ruby gems for more pulls on the warp pipe, as well as five Star Tickets. For Diddy Kong, however, this will cost you £38.99, including 90 gems and a Quick Ticket.

The version of Princess Peach wearing a kimono, however, requires you to invest some serious time into the warp pipe.

Social media has been asking questions of all the microtransactions in this game at launch, as there's a premium subscription service for extra cosmetics, along with the free-to-play base game.

What do you make of the microtransactions?

The mobile racer has just been updated with another new multiplayer feature.

The multiplayer mode for Mario Kart Tour is now officially here, with more bonuses to come if a certain retweet milestone is achieved.

The Mario Kart mobile spin-off is getting multiplayer imminently, although you'll have to pay to mix it with the best.

The New Year's Tour will be held from January 1 to January 15 and introduces new cups and items. 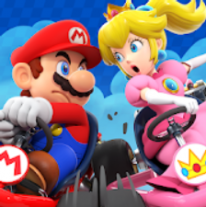