Just before the Easter weekend, we were lucky enough to catch up with Supermassive Games co-founder Pete Samuels, who gave us an overview of the studio's next horror game via a pre-prepared keynote speech before talking to us directly about what's next from the specialists of spooky.

The game in question is called Little Hope (if we're going to hit you with all the syllables it's actually The Dark Pictures Anthology: Little Hope). The follow up to Man of Medan, it's actually the second in a planned series of eight horror shorts that explore the genre's various dark alleyways and avenues. Where the series set sail with Man of Medan, which took players aboard an eerie ghost ship, this follow-up takes place in an abandoned village in Massachusetts called Little Hope.

Little Hope's story is based around one of the great unacknowledged genocides of history; the witch hunts that took place in so-called civilised countries as part of a sustained campaign of terror against women by religious groups that saw countless innocents murdered in the name of Christianity. We're not sure how the game will walk this precarious tightrope of themes, but as Samuels explained to us, The Crucible by Arthur Miller had a big influence on the project, and we got the impression that the development team had been doing their homework, exemplified by the fact that the name of the town itself is plucked from the pages of history.

The story is split between time periods, with the narrative jumping between past and present, when a group of young people are stranded in the middle of nowhere due to a series of unfortunate events. The middle of nowhere has a misleading name in this instance, and that's the long-abandoned town of Little Hope, a place with a terrible past that has long since been left abandoned by those who once called it home. The story of this new horror adventure is tied to that dark history, with narrative strands somehow connecting a story of modern survival to historical atrocities.

"The narrative challenge for us was to make sure that there were no inconsistencies and what happened in the time period connects properly through time," Samuels told us when we asked about the challenges of blending a narrative set in different time periods. "Of course, in a branching story, if you're influencing things that are happening in various time periods - that's a bit of a nightmare. But most of the gameplay [in Little Hope] takes place in the present day, mainly; seeing the influences from the past and trying to figure out how that's caused the events for the town in the present day, and throughout its history."

Supermassive has a reputation for getting great results out of the actors it works with. This project's headliner is Will Poulter, who we saw brief snippets of during the presentation. During the keynote, we were impressed by how he switched between a more modern American accent and one from the north of England for the historical parts of the game (as we discussed during the interview, the settlers were actually from East Anglia, however, a thick Norfolk accent can be hard to penetrate for an untrained ear so they instead opted for something more northern). While Poulter performs between eras and in one scene seems to somehow meet a version of himself from the past, the rest of the historical cast is made up of actors from the north of England, to create a more authentic-sounding experience.

Atmosphere and tension are at the heart of things. On top of professional performances from capable actors and some stunning visuals, by using fixed camera angles, the studio is able to dial into an abundance of cinematic horror imagery and bring the player firmly into the experience via a tightly controlled visual experience. It's not for everyone, granted, but it's what the developer does and it does it well. That approach certainly hasn't changed for Little Hope, which aims to be even more cinematic than its direct and indirect predecessors.

"The benefit of only showing you what we want you to see and you not knowing what's out of shot is huge for building tension," Samuels told us when we asked how Little Hope had improved compared to Man of Medan. To make the fixed cameras work for more people, the studio has implemented an additional camera system that takes over in certain situations, that we're told should help you forge a stronger bond to your character during key moments (before they die in some horrible way, no doubt). We're promised more "freedom to look around" and "more freedom to move the camera", a change which should make the game more accessible.

The studio still knows how to create an impactful image, and we saw several moments during the opening few minutes of the game that spoke to this. In no particular order during the demo, we saw people lost in the woods trying to work out whether to split up or stick together (we all know the answer to that particular question), shocking scenes as a family is devastated by a fire, and a sinister-looking girl who suddenly appears out of nowhere and initiates a deadly chain of events. It's powerful, gut-punching stuff, but we also seem to be jumping between narrative strands. There's always a risk that things get too convoluted when hopping between periods, however, Supermassive seems to have a handle on that, too.

"To understand a story there's a certain amount of information that you need to have received to know what's going on," Samuels told us. "Splitting that between two players is quite dangerous, in that we could get to the end and neither player knows what's going on. That's quite a fine balance and designing for two players is particularly tricky," he added, in the same breath confirming that the co-op experience from Man of Medan is returning in Little Hope.

"But also with the multiple branches, it's taking care to make sure that nobody can disappear down a branch that means that they avoid critical information that they need to understand the story. And the more complex and more layered the stories are, the more difficult that is. So Little Hope has been a particular challenge for that reason because it is more multi-layered than anything we've ever done. It's a more complex story, in that sense."

Another evolution we're seeing from the studio is the way that players are armed with all-important context, and how their actions will impact the digital realm. Samuels explained how his team is trying to give "people more information, more context for, not just what's going on or what's gone on, but what's going to happen when they decide to do something, when they decide to interact with something. When they pass a QTE, what is the action that's going to happen rather than that actually being a surprise in itself?

"So that's mainly where we're taking the evolution for the second in the series. We have other thoughts based on our learning from development, on what we'll do on the third and the fourth and so on, but really we won't know that until we get feedback from Little Hope."

That process will begin when The Dark Pictures Anthology: Little Hope lands on PC, PS4, and Xbox One later this summer. 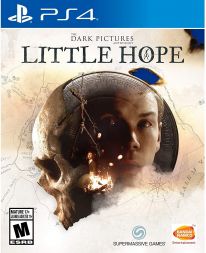