The Dark Pictures: Man of Medan was released in August last year and even before the successor title The Dark Pictures: Little Hope was originally announced, attentive players could find some clues hinting to the next instalment. When we recently looked at the latest part of the series for our own review, we came across a similar teaser.

There are different types of collectibles that can be found throughout the game and one variant gives players "a possible glimpse into the future". This particular kind, photos, usually present visions of key moments that have far-reaching consequences and should therefore not be accidentally overlooked by the players. However, one collectible in Little Hope stands out because it might give us a preview of another game.

The image we are talking about is called "Rope" and you can find it in the last chapter of the game. It shows a young woman with an armoured protective vest, either abseiling or pulling herself up on the edge of a cliff. However, her lifeline will be cut (or it breaks) and as a result the young woman falls into the abyss. No other character in Little Hope resembles this woman, nor do we find the military setting in the current iteration of the Dark Pictures Anthology. So is this possibly a teaser for the next chapter? Perhaps.

There is a second clue that is placed by the omniscient narrator towards the end of the game. After the events come to a close, the curator leaves the room with the words: "Till we meet again. Maybe in the South Pacific, or in the Arabian Dessert. Or somewhere else. But we will see meet again, at least one more time." Originally, Supermassive Games wanted to publish a game in The Dark Pictures Anthology every six months, but they couldn't keep up their schedule. Let's see when Bandai Namco tells us more about the next chapter. 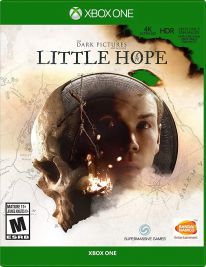