As confirmed in a recent post shared on the game's official webpage, Ubisoft has just called time on its support for Rocksmith, the musically-inclined game that first landed on old-gen consoles all the way back in 2011, before returning on current-gen consoles in 2014.

As outlined in the note to players, the team is working on a new project (more information is coming "when we're ready" so don't hold your breath for something soon), and that change of focus has prompted the team to stop working on DLC for Rocksmith altogether, which means they're stopping after an impressive 383 weeks of DLC releases and with a library stuffed with 1570 songs that span both decades and genres.

While there won't be any further DLC, the developer confirms that it still has weekly online content planned, the Dev Stream is set to return in a new format, and we're promised a few more "surprises", although it's not clear what those surprises might entail.

REVIEW. Written by Gillen McAllister on the 25th of October 2013 at 13

"It's definitely an improvement over the first. The team have done good."

Rocksmith 2014 on new-gen getting Hendrix tracks

Out now on Xbox One, PS4 version incoming.

Xbox One and PlayStation 4 versions inbound.

Rocksmith 2014 finally jamming onto PS4 and Xbox One? 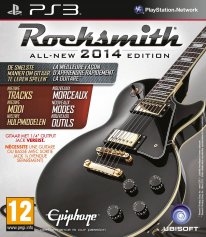