Ubisoft's MMO racer The Crew was released back in 2014, and early next year developer Ivory Tower will be looking to expand on its ambitious vision for online racing with The Crew 2, bringing planes and boats into the mix alongside cars and bikes. Gameplay and cinematic trailers were shown during this year's E3 press conference, but we were then invited to a dedicated session to play the game in Los Angeles after the conference had concluded, and there we saw a number of vehicles and different settings in action.

The cars, firstly, feel arcade-esque in their handling, so you can pull off outrageous jumps, nitro boosts, and handbrake turns whenever you like. We found this worked pretty well, although it took some getting used to, and it won't be to everyone's tastes. Handbrake turns, for instance, are very tight and sudden, so you can easily turn too early into a corner without meaning to. When we took to the offroad tracks, however, we found the handling significantly more challenging, and we struggled to stay in a straight line a lot of the time, so it required much more attention than the street racing, feeling less arcadey as a result.

The new planes and boats are seemingly less fun to play, as you have fewer obstacles to avoid. Most of the fun in these kinds of racers comes from high-octane action, via collisions with other players and obstacles, and taking these away makes for a slower kind of experience. The flying sections we played, for example, only had a mild amount of danger in between gates, and the boating sections had a handful of jumps. We much preferred racing in the cars as a result, so we hope that the full game contains more exciting sections for the air and sea races/missions.

In terms of how you use each vehicle, as expected you can participate in race events for planes, boats, and cars, but when you're in free mode there's also a feature whereby you can click the right stick in to bring up a menu, using it to change to either of the other two vehicle types. You then swap into that vehicle there and then, but as you can imagine this needs to be deployed at the right time and place, as transforming into a boat on land doesn't work well. This system allows for smooth dynamic movement to keep the pace high at all times, and there's a certain satisfaction going from water to air to land and back again all in one session, without menus.

The settings we drove through were also impressive, taking you to a number of American locations as in the first game. During our demo we drove through the dirt tracks of Maine, and flew around the skyscrapers of Manhattan, just to name a couple of places, but we saw much more on the map when we zoomed out, with distinctive locations such as Los Angeles and Chicago waiting to be explored. The shift between locations helps keeps things fresh and varied, but this isn't much of a change from the first game, which also saw you tackle locations across the USA. There's more detail and polish here, though, especially in terms of Manhattan, where we participated in a flying race that took us next to iconic landmarks like the Empire State Building.

During our demo we only got to play a handful of missions, and these all revolved around hitting checkpoints before getting to the eventual finishing line: pretty standard stuff. As we were driving through the hills of Maine, for example, we were able to take any route to get to the next checkpoint (we opted for trying our luck through the trees, while others took slightly more indirect but clearer routes). While the missions might not be hugely imaginative given the restrictions of the genre, we appreciated the option to pick our own path as it gives an element of risk vs. reward to the game, offering yet another different style of racing to the streets (and rooftops) of the city.

One weird feature we should also mention is that the extreme nature of The Crew 2's racing gets twisted when Ubisoft moves the world around you. What we mean by this is that when you're racing the land around you curves as if you're racing in a sphere, twisting reality to up the anti, regardless of which type of vehicle you're racing with. While this didn't add anything majorly different to the gameplay, the change of perspective was unexpected and offered something new, although the novelty of this may wear off after a while, we'll have to wait and see.

Overall, though, The Crew 2 looks like a solid sequel to the first game, especially in regards to the driving, although we don't think that the planes and boats add too much to the game as things currently look. Most of the fun is had behind the wheel of a car still, and the shifts in perspective, detailed environments, and stunt jumps help keep things extreme. It remains to be seen how much they can put into the game at launch to keep it interesting for players, especially in terms of mission variety. We'll find out how they do when the game lands on PC, PS4 (Pro) and Xbox One (X) next year. 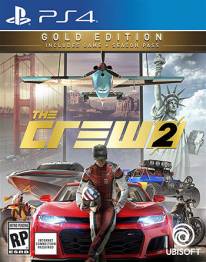