Set long after Judgement Day, the self-aware machine known as Skynet is still fighting it out with the remnants of humanity in what's left of Los Angeles. In Terminator: Resistance you take control of private Jacob Rivers, the last surviving member of one squad in John Connor's Resistance, who teams up with some other survivors to battle machines. It's a first-person adventure that serves as a prequel to the first two Terminator films. In fact, the story of the game leads right up to the start of the first and second film.

The first two movies in the still-growing cinematic saga hold a dear place in many a heart, and they have spawned a number of games over the years, sadly without too many of them being particularly memorable. Regrettably, Terminator: Resistance carries on in this vein, in the sense that it's a good game, but not a great one. In fact, we're going to set our stall out now and say that while we had some fun battling these machines, we can't help but feel that this is a missed opportunity.

Fresh off the back of an attack by an infiltrator unit (basically Arnie from the first film before pretty much every other entry into the series decided to reprogram him and turn him into a good cyborg), Jacob Rivers runs through the streets dodging plasma rifle fire. During this tutorialised intro, people around him are dropping like flies and it's all well-designed, showing you the controls and getting you used to the setup. However, after a few minutes of frantic action, you end up sneaking past and/or taking on a few robots. Sadly, you're not quite ready to battle the T-800s, as you only have normal shell-based weaponry.

We didn't really have much luck at sneaking so these bots made for good target practice as we tried to perfect our aim. In fact, the relative ease with which you could gun down your robotic opponents throughout the game made sneaking feel a little redundant. After that, we ended up stumbling across a woman and her little brother. A couple of dialogue options popped up and then some telling words appeared our screens - "your choices matter" - something which feeds into the game's alternate endings. Having varied endings does offer some replayability, but our experience was so bland at times that were not sure it's worth it, as the ending is merely a series of storyboards that summarise your decisions through the game.

In terms of the visuals, it looks a little bit like Fallout, which is fine, but every now and then the textures would look a bit rough. If anything you might say that it looked a little dated. The machines looked great though, and there was nothing wrong with the overall spectacle, it's just that it didn't feel like developer Teyon was doing anything new. You could tell they had researched the source material, for example, the base you use between missions looks like the one out of the original Terminator film.

One thing we really disliked, however, was the level design. It initially appeared more like a sandbox, but it soon turned out that it really wasn't. There was always one place to head to, and one or two ways to get there. We often found ourselves boxed into corridors by burning or broken cars - it gave us the illusion of it being open, but sadly it became all too obvious that your choices didn't really matter when it came to which direction you were heading, as you had to go one of two ways. Every time you completed the main objective you'd end up back at base, and then after some interaction, off you'd trundle again.

During the game's various scenarios, when we weren't killing enemies, we were trying to find things to trade and materials for crafting equipment, as well as tackling side quests. While that sounds like everything you might need in a modern shooter, the crafting system is literally pushing a button to make something, and it didn't go much deeper than that, nor did it explore any new ground. Beyond that, the side activities were quite often simple fetch quests that had us finding meds or whatever, and if they weren't fetch quests, we had to blow something up. In fact, most of the missions were just "go there and kill something".

Other than that, there was the gun modding system and, of course, there's some levelling up to be done. You can add skills points to things like lock-picking and backpack space. However, at times it felt like we had been making the wrong decisions, for example, at one point we had a skill point and we used it to upgrade our backpack. However, when we went out on our next mission it was painfully obvious that we should have upgraded our lock-picking skills. What felt like every door we tried was supposed to be an easy lock, but sadly they were all above our level. We ended up having to kill loads of enemies to gain more exp, and once we had allocated that to lock-picking, we tracked back, opened up the doors we had missed only to find more boring goods to trade.

While Terminator: Resistance is fully featured and has everything that you might expect from a modern story-driven shooter, it never pushes the boat out in any one area. It's a perfectly acceptable Terminator game that has plenty to do, however, there was so much room for innovation here. A real open-world RPG could have worked a treat, instead, we got a first-person shooter with a few bolted-on RPG elements. That said, we realise that we've been rather critical, and we did have some fun at times. The story was interesting enough and kept things moving, and then there were the T-800s; we genuinely found our hearts racing when we were outgunned and had to hide behind cars, sticking to the shadows to avoid their red-eyed gaze.

This mixture of more challenging combat and evasion made for some of the game's more entertaining moments, although once we got the plasma rifle it lost a bit of its charm in the terms of hiding and sneaking, as we knew we could just gun down our once-dangerous opponents. Speaking of which, the weapon handling didn't feel overly satisfying, but the controls did feel perfectly at home on a console. Oh, and while we're happy to praise the sound effect, we want to say we were hoping for more booms, zaps and bangs from the plasma rifle - they didn't really make enough noise for our tastes.

The last thing we'll say, and we're sure this point won't appeal to everyone, but it does look like very achievable Platinum/100%, so if that's your interest, Resistance has got that going for it. In the words of one John Connor: "Easy money".

All in all, Terminator: Resistance isn't a bad game, it's just not great either, which is a real shame because it could have been so much better. The graphics are OK, the sound effects recognisable, and the story is alright. In fact, it has all the elements you'd want from a futuristic shooter, yet nearly everything we encountered was either under-cooked or over-simplified, and the overly linear level design made us feel a little claustrophobic. Resistance is far from being a classic, although it is probably worth a play-through if you're a big fan of the series.

Gamereactor UK
+
Looks solid most of the time, and has the feel of a Terminator film.
-
Boxed-in and restrictive level design, underdeveloped features such as crafting, unimaginative.
is our network score. What's yours? The network score is the average of every country's score

"It has all the elements you'd want from a futuristic shooter, yet nearly everything we encountered was either under-cooked or over-simplified."

Terminator: Resistance seems to be getting a new edition

Terminator: Resistance is a hardly tolerable game released for PC, PlayStation 4 and Xbox One last year. But as we come to expect from a Terminator, we might expect them...

We get to experience another story in the world of Terminator, and you can join us as we explore.

The newest game in the Terminator universe also comes with some digital comics, expanding the world.

A new video from the upcoming Teyon and Reef Entertainment title gives us a look at the opening sequence of the game. 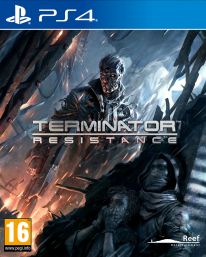