The Swedish developer Machine Games hit a home run with audiences when they made Wolfenstein: The New Order, and last month's announcement of the sequel caught nobody by surprise. The American 1960s setting, however, did surprise some, but it was a pleasant surprise. Today publisher Bethesda Softworks released some new footage from Wolfenstein II: The New Colossus, and it shows us a scene from the diner we've seen in earlier videos.

Prepare for an annoying Nazi slurping a strawberry milkshake and cracking nonsensical jokes, followed by some tense moments which are surely inspired by Tarantino's 2009 movie Inglourious Basterds.

Wolfenstein II: The New Colossus is coming to PC, PS4, and Xbox One on October 27. Do you like the change of setting?

"When taken individually each one might feel a little underwhelming, but considered together the Freedom Chronicles feel surprisingly cohesive."

"It's a blast in every sense of the word, and as far as we're concerned it's the best shooter of the year (so far)."

Game Pass has expanded with a number of big games, all of which are landing over the next few weeks.

"We all have to see how that ends."

Today's livestream sees us return to Wolfenstein II via Switch

The game has just landed on Nintendo's console.

See our Wolfenstein II gameplay on the Nintendo Switch

Including the opening of BJ Blazkowicz's journey.

Panic Button has done a lot of work on the technical side of things.

A new SD may be in order. 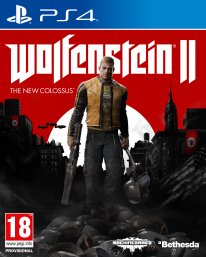