A new press release has revealed to us the Tennis World Tour: Roland-Garros Edition, bringing the amount of ATP and WTA stars in the game to 33, including Rafael Nadal and Kristina Mladenovic.

You can play matches on the clay with these players, and motion capture has been used by Breakpoint Studio and Bigben Interactive to ensure realism for these players, like swinging styles and movement.

It's not just new stars we can expect though, as there is even more content that sees players experience the Roland-Garros at Philippe-Chatrier, Suzanne-Lenglen, and Simonne-Mathieu. We also get the central court at the Mutua Madrid Open, a new customisation tool to create your own player, and more.

This will be coming on May 23 for PC, PS4, Switch, and Xbox One, and you can watch a Nadal reveal trailer down below, along with some new screens.

Will you be getting into the tennis action later this month?

This features stars like Rafael Nadal playing on new courts, along with a fresh customisation tool to create your player. 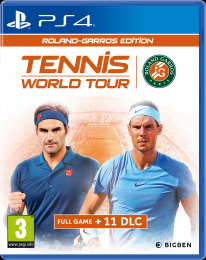