Last week we were invited to the presentation of the first proper tennis game to land during this current generation of consoles. It was about time: it's been seven years since the release of the last Top Spin, and that's why French studio Breakpoint has fully embraced the project, they sense opportunity.

Creative director Etienne Jacquemain and producer Romain Ginocchio were at the presentation to show off this new and much-anticipated game, and they opened by explaining how they wanted to make a simulation, something more like Top Spin than Virtua Tennis. More difficult to develop than a simple arcade game, sports sims are based around physics, with the quality of the animations reinforcing realism, something that Breakpoint seems to understand. Indeed, they explained their desire to create the most fluid movement possible, the most credible effects, all at a non-negotiable 60 fps. To achieve their goals they teamed up with both motion capture studio Mocaplab and some professional tennis players.

The studio has a relatively slender budget for an undertaking of this magnitude, and this is most keenly felt in terms of the licenses. Some great players are absent from the game, Rafael Nadal and Andy Murray to name but two. On the other hand, current number one Roger Federer, along with Stanislas Wawrinka, Gael Monfils, and Lucas Pouille will all be in the game... At launch it will offer something like thirty players and, given how they're tennis fans themselves, they have focused their choices towards promising young players.

"We wanted to integrate players of the new generation," Ginocchio told Gamereactor at the event. "Some have really managed to rank well during the last tournaments. Particularly at the Australian Open, where three of the four finalist players are already integrated in the game, or the masters [at] London, where they were five out of the top eight."

In other words, if the game enjoys long-term success, the players chosen could work out well. As for women's tennis, the studio only offers five players at present, including Caroline Wozniacki and Garbiñe Muguruza. The producer told us that the studio wanted to add more, but for now, talks are ongoing and they will most likely arrive as part of a paid-for DLC coming after the release of the game.

It was equally difficult for the studio to license the official tournament courts. To overcome this obstacle the studio went straight to the people who designed them in the first place, and in doing so they have recreated no less than 18, each one different from the last. From Wimbledon to the US Open with surfaces of various kinds, each one will be unique:

"We talked a lot with tennis players, especially about the different tennis courts. Some remember high altitude games. At this height, breathing is more difficult and the ball [moves through] the air differently. Or the famous blue court in Madrid that the players hated so much. We tried to integrate the maximum of subtlety to the courts with their own physics. Same for carpeted and wooden courts."

Tennis World Tour will feature several game modes, including an exhibition mode, competitive online matches, and a career mode, with the latter set to be extensive. You will play as a character you have created, dressing them in gear drawn a collection of 500 unlockable items for both men and women. You will have to choose different coaches from a wide range of options, and they will help you customise your character through the acquisition of skill cards. We know what you're thinking, but no, the cards won't be found in loot boxes; it's only by advancing in your career and by hiring coaches that you acquire them. Each coach has their own cards, and you're free to choose your coach according to the skills that best suit your style.

These cards add passive skills as well as abilities linked to particular moves. Rest assured, the studio wants to find a good balance to avoid ending up with five cards that outperform all others. Thus, the game will have plenty to unlock, and your character will be unique according to their appearance as well as their special abilities. However, the customisation options don't stop there, you can also increase the ability of your character across a trio of areas: defence, attack, and serve / volley. Each point spent will increase your abilities accordingly, but you can't always spend your points in the same area:

"Services, for example, are extremely important both in the game and in real life. If a character is too good only in this area, it creates an imbalance that we want to avoid as much as possible, a bit like an RPG in short," Ginocchio told us.

Managing your fitness is also essential, and not just on the court. Once your career is up and running, you choose which tournaments you want to take part in. Your player might suffer from the jetlag depending on where they are travelling to, for example. They'll get tired more quickly and then they'll be more prone to injuries. You will, therefore, have the choice to slow down your progression or keep going at full speed but at the risk of injuring yourself in the process.

We were able to try the exhibition mode in 1v1, playing a pre-beta version of the game. It's worth noting that the 2v2 mode is also on the way, but will come sometime after launch via a free piece of DLC. Once on the court, however, we quickly realised that the game doesn't look all that good. Aside from the rather rigid animations of the crowd, the faces of the players, although recognisable, aren't photorealistic. That's because of Breakpoint's push for a steady frame-rate. For the studio, the game must run at a stable 60 frames-per-second:

"It's too difficult to follow the ball at 30 FPS, it was absolutely necessary that the game runs on all consoles at the best possible frame-rate," we were assured. Indeed, the game is fluid and the animations feel natural, even if they still generate some easily fixable bugs.

Someone from the dev team also told us that the court was divided into nine zones. If the shot is too strong, the ball is more likely to land out of bounds. The power of each shot must, therefore, be adapted according to the position of the player. Playing this way made us recall the enjoyment we had with Top Spin back in the day. The timing is demanding, the strike power must be controlled, and the variety of moves subtle but impactful.

Despite some bugs, the game remains playable. The animations sometimes lack the natural feeling you might expect and the movements are not always completely convincing, and some rallies were ruined by frustrating elements. For example, it seems overly difficult to make a successful drop shot, and at times we were able to reach shots when we felt too far away, while at other times we felt closer but couldn't get there in time.

The Switch hasn't been forgotten by Breakpoint. They've also made a portable version of the game and it seems well done; it's more accessible than on PS4 and Xbox One, and the Switch version has a gentler learning curve. It looked just as fluid as the others, and it seemed to display at 60 frames-per-second without major difficulty, with the screen size even obscuring the sometimes rough graphics. Throw in local matches playable on the portable system and it's a convincing alternative to the home console versions.

It would be ace if Breakpoint manages to get rid of the bugs, especially those affecting the animations and certain shots. If they can then Tennis World Tour could easily find an audience. What with it being the only real option for tennis fans currently on current-gen consoles, we're expecting nostalgic fans to take a careful look at it come May, when it's served up on PC, PlayStation 4, Switch, and Xbox One.

"It may have a stable foundation but it also has a very uncertain future."

The esports competition is getting an expanded second edition ahead of the game's full launch in May this year.

PC and Switch players will have to wait a touch longer.

This will be held at Roland Garros, the French Open.

There will be an esports tournament in parallel to the Madrid Open.

Breakpoint is preparing to serve up a sim for tennis fans eager to get back on the court. 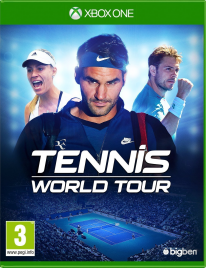