It happens on occasion, generally on rainy Sunday afternoons, that my son comes around holding a couple of controllers demanding a bit of co-operative action. Sometimes it's the old Xbox controllers, and sometimes more recent Xbox 360 controllers, but regardless of that choice, Turtles are high on the list of possible co-op games.

We've spent countless hours on Teenage Mutant Ninja Turtles from 2004 on Xbox or the more recent (well, sort of) Teenage Mutant Ninja Turtles: Turtles in Time on Xbox 360. Both titles entertain, if only for limited lengths of time, when you feel like some quick and easy button mashing and turtle acrobatics. It was therefore with a warm feeling of anticipation that I went ahead and downloaded the last of the Summer of Arcade titles on Xbox 360. However, there's no hiding the fact that I was in for a massive disappointment.

It only takes a few seconds to be confronted with one of the most flawed elements of the game. It's not unusual that you're typical third-person hack 'n' slash can suffer from some ill-advised shifting of camera angles, but this is taken to whole new levels with Teenage Mutant Ninja Turtles: Out of the Shadows. The camera is decent for the more calm sections, but when all hell breaks loose and a boss needs taking care of, then things take a catastrophic turn for the worse. I completely lost my orientation admidst the chaos and when the clearly broken camera system opted to have me witness the action from inside a wall, well, I don't need to say more. Unfortunately this robs any enjoyment out of the otherwise well crafted end of level boss fights.

The experience is further hindered by poor framerates and graphical imperfections, and the game comes across as unpolished and mediocre. If you hit the pause button, you'll notice that it looks pretty neat on a static screen, but once it comes to life it just doesn't look good. It robs you of every ounce of pleasure derived from beating up Shredder's footsoldiers.

The cutscenes are made up of static comic book pages and bridge the plot between playable sections. A nice idea in theory, but unfortunately the quality is pretty low, and the four loveable ninjas look more like balloon animals than the fierce reptiles we've grown to love. The whole package wreaks of cut corners and half-assed quality assurance.

There are numerous examples of recurring graphical and technical issues, and among the more spectacular instances I experienced was when one of the computer-controlled characters jumped into the air in order to avoid an enemy. Nothing particularly strange if it wasn't for the fact that he was left hanging, frozen in mid-air. The battle raged on under his feet, and a couple of minutes later he rejoined the land of the living. Other annoyances include invisible walls that destroy the illusion of any freedom. There are also plenty of examples where you can jump over boxes in one location, but the next time you happen upon identical boxes you simply cannot make your way past them. It ruins the pacing and flow of the game, and if it wasn't for the fact that I was reviewing the game I would have stopped playing a long time ago.

The story part of the game can be played through in roughly four hours, and after that you can play the game online with friends (up to four players). You will relive the story once again, but there is added motivation through a well crafted skills system, where you gain XP with which you unlock new abilities. There are lots of them to unlock for all four characters, and sadly this is one of few qualities the game offers. Some of the more exotic abilities are entertaining as they involve synchronised diving performed by the Turtles. The only problem with the skill system is that you have to play the actual game in order to progress...

In addition to story mode there are "challenges" and "arcade" modes to spend time with. The latter is played like a side-scrolling 2D game and plays a bit like the old TMNT titles. The part of Challenge mode that I tested offered up wave-based combat and it was plagued by the same shortcomings, horrible camera and graphical glitches, as in the main game. The Arcade mode, on the other hand, works fine, and is the only part of the game I'd care to revisit.

Leonardo, Michelangelo, Donatello and Raphael have always been good for a few fun lines of dialogue, and that's true for Out of the Shadows as well. The first few dry lines actually crack a smile or two. Perhaps it won't have you rolling on the ground, but it's good enough to make it feel like a proper part of the Turtles universe. However, the repetitive lines soon grow tiresome. As for the rest of the soundscape, it's made up of hard pumping dance music that I opted to turn off after a brief period of suffering.

If you're still tempted to part with your hard earned cash after reading this cautionary tale you may want to know that it will set you back £9.99, and given what that can buy you on Xbox Live Arcade, you really need to be a hardnosed Turtles fan for this to be worth your while. And in spite of having spent many years with the martial arts powered reptiles I can guarantee that this won't be your next co-op addiction, and that your friends won't be asking you to bring this one out for a bit of a co-op romp on the couch. It will only cause nausea and high blood pressure I'm afraid.

Gamereactor UK
+
Lots of skills to master, The occasional entertaining line of dialogue. Arcade Mode.
-
Unpolished and full of technical glitches. A camera that blows well over the legal limit and ruins gameplay. Repetitive dialogue loses its luster.
is our network score. What's yours? The network score is the average of every country's score

TMNT's Raphael comes Out of the Shadows 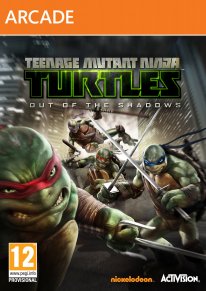