When making a video game based on TMNT it's difficult to avoid two things - brawling and co-op. Platinum Games' Mutants in Manhattan has lots of both, but it also surprises us with its open structure. This is truly a game that has been designed for multiple play-throughs.

Platinum Games is a studio you'd expect quality beat 'em up mechanics from and they're staying true to their two-button-based combo set up with Mutants in Manhattan. That said, the nature of the Turtles and their more extravagant special moves (that are on cooldown timers) as well as the various useful items (pizza slices for health, as well as various grenades and the like) you can bring into combat makes for a very flexible and diverse combat system that truly allows for some advanced co-op tactics.

One example of this is Michaelangelo's Cheerleader move. Once activated all cooldowns are reset for all characters, so if your team times it, use their specials just prior to Michaelangelo using Cheerleader and then unload once more straight away, you can really do some damage to a boss in a very short amount of time. Donatello is capable of healing the group and bringing back fallen comrades with his specials (if you happen to die you're taken to a screen where you eat pizza to recover - if all four turtles are munching on pizza it's game over). Raphael and Leonardo have more of a damage focus to their specials, but damage dealing is something all four turtles are good at.

The way the game is structured, each stage or map is themed around one boss. The idea is that you conquer a series of increasingly difficult missions within the large, open level until you ultimately unlock access to the boss battle. In a way you're building yourself up, earning credits you can spend on items for the boss fight. What's interesting is that these missions will be different each time and while some are fairly straightforward things such as taking out a certain number of foot soldiers, we also happened upon a rare mini-boss-type spawn (that's apparently only meant to spawn 3% of the time you play the map). It's a system with great potential, even if we were rushed to the boss fight without being able to fully appreciate just how much variation and escalation there is.

It was Bebop's map that we got to play (expect to see all the old favourite baddies feature here, Rocksteady has been confirmed and, naturally, so has Shredder) and the boss fight was rather intense as he dropped plenty of bombs around the small underground arena where the fight took place. The location was our only real problem as the camera wasn't as good as it is out in the open. You're capable of wall-running and the camera would misbehave at times in the enclosed arena.

Platinum Games has opted to mix influences from several iterations of Turtles in this games, so unlike say Transformers Devastation, this isn't purely a nostalgia trip even if the original comics and cartoons are part of the inspiration, but in terms of visuals the half-shell heroes are closer to what you see in more recent cartoons. The story has been penned by IDW Comic's Tom Waltz.

While not 100% polished at this point in time, there's still time to go and there is no reason to expect this to slip below the usual Platinum standards in terms of quality assurance. It's only a shame that the game doesn't offer local co-op, but given the nature of the game design with large open levels it's perhaps not that surprising, but you will want to play this online with friends as there should be a tremendous difference between playing as part of a well coordinated squad of cold-blooded mutants, and just joining a game with random people.

Could this be Platinum's best licensed game to date? Early signs suggests that this might well be the case.

"Third-person brawling with Ninja Turtles and Platinum Games should have been a match made in heaven."

No more Turtles on digital sales

Mutants in Manhattan does a disappearing act on Steam, Xbox Live, and PSN.

Platinum Games' co-op brawler due out this week.

Also, there's a $2,300 statue rich Turtles fans may be interested in.

We have a chat with Activision and Platinum Games about Turtles: Mutants in Manhattan.

There's really only one thing you can serve the players during a session. 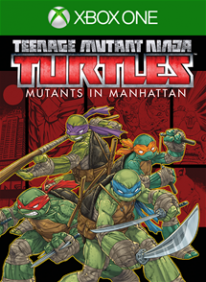