Up until now Media Molecule have been synonymous with Little Big Planet. The wonderfully imaginative phenomenon that has spawned 7 million player created levels since its arrival in October 2008, and the game that coined the play, create, share moniker. All of that changed on August 14 as Tearaway for PS Vita was premiered in Cologne's Staatenhaus during Sony's Gamescom press conference.

How do you best go about trying to follow up on such success? If you're Media Molecule, you don't even think along those lines and instead you start paper crafting your way to the next project.

"I'm a complete novelty junkie as well so I always want to be experiencing new things. And obviously, we're very excited to sort of unleash a new IP," comments creative director Mark Healey. "We still got our fingers involved with Little Big Planet a lot, still something that we love. But it is nice to expand and explore new ideas."

"It's also very scary. We had similar emotions, we did until a couple of days ago, that we had with Little Big Planet. In that, until it's out there, until people see it, we just don't know whether this is something that just we like, cause it's kind of luck as to whether other people will be into to the kind of games that we're into," says technical director David Smith. "We're kind of selfish in that way that we just want to make something that we love, a tiny team, so we just put our heart and soul into making something that other people can connect with that is great."

Sackboy was ever present at Gamescom, with the cross controller DLC for Little Big Planet 2, Little Big Planet PS Vita, Little Big Planet Karting, and Playstation All-Stars Battle Royale in attendance. And while the paper cut out Sackboys outside the entrance on day one kept falling down as the wind ripped into them, he is a tough act to follow. But once again Media Molecule are doing something with Iota different to what's been done with Sackboy. Where Sackboy was a blank canvas for us to decorate and interact with, Iota plays a different role.

What we saw of Tearaway, was a glimpse into what to expect from this paper crafted adventure. It saw the player solving puzzles and defeating enemies by using their fingers on the rear touch pad. Or beat virtual drums in order to make Iota bounce off them, and blowing into or screaming into the microphone to simulate wind and well, the Tearaway equivalent of that very first dragon shout you learn in Skyrim. You're a God holding a tiny paper crafted world in your hands, interacting with it and helping a little speck along on his adventure.

Everything is wrapped in the playful style we've come to expect from Media Molecule, without looking like anything they've done before. There's something delicate and organic about the look and feel of the visuals - something Media Molecule worked very hard to achieve.

"When you're trying to emulate materials like paper and things, you've got this uncanny valley danger. Cause, actually early on in development there was a stage when the game looked similar to how it looks now, but we kind of thought "yeah, it looks like it's made out of paper" because we knew that was the idea, but to anyone who wasn't in on the idea they just thought it looked like low poly and a bit old school," Healey explains when talking about the struggle to make paper crafting look good.

It may not be as readily apparent how Tearaway fits into the play, create, share model, but Media Molecule wanted to give more immediacy to that process this time around. Creating and sharing in Little Big Planet takes a bit of premeditation and even if the tools are wonderful, they are separate from the game itself.

"The level that we used in the announcement, we actually have that all physically built, just laid out on a big table," Mark Healey said revealing the first secret to paper craft level design.

"Paper is this really exciting medium, cause so far most of the visuals that you've seen have been very much sort of a western type of paper craft, in that it's cut out and folded and glued. Often we talk about origami, but there is actually very little origami currently in there," David Smith explains. "But so for the different environments you're travelling through, the world has very different styles of paper craft - sometimes many layers of paper glued together to make kind of thicker structures, many different cultures have different approaches to that. So we're hoping that we can really incorporate these different ideas and show how versatile, this seemingly simple notion of paper can become."

For PS Vita fans there are many encouraging things to take away from this year's Gamescom, but perhaps most important is the fact that Sony are putting some of their top talent - Media Molecule and Guerrilla Games - on PS Vita development. And Tearaway is that shining beacon of hope every new platform needs in order to rally the troops.

REVIEW. Written by Magnus Groth-Andersen on the 20th of November 2013 at 08

Media Molecule is one of Sony's most prolific studios.

Lots of new pics, and a trailer thrown in for good measure.

Rex Crowie discusses how the three act structure of PS Vita will unravel, and bringing you and the character together.

Early birds to get some goodies, including a rideable pig! 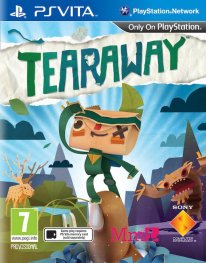