Unlike many other Japanese role-playing franchises, there is no clear cut fan favourite when it comes to the Tales of games - Tales of Phantasia, Tales of Symphonia, Tales of the Abyss, Tales of Vesperia, or Tales of Xillia 2. These are just some of the games in the running. But there's none that really stands apart from the the rest of the crowd. Generally speaking though, playing a Tales of title is a safe bet. A rare thing, especially when considering it's such a prolific franchise. On top of the consistently positive reception enjoyed by the series, there simply aren't any games that are universally loathed by fans.

It would appear as if Bandai Namco, governed by franchise producer Hideo Baba, have managed to guide the series from one welcome innovation or change to another, without ever losing sight of the core concept. That is not to say there aren't differences to be found. There are charismatic characters, simple narratives that evolve into deep and complex stories, polished visuals, lots of side quests, long adventures, and perhaps most importantly, a dynamic combat system that is tweaked and innovated for each entry.

With so much change it might come as a surprise that the franchise now sports fifteen main entries, and more and more of them are making it out of the domestic Japanese market. It hasn't been that long since we got Tales of Xillia 2 in Europe (August), and now here's Tales of Hearts R on Vita. We're still lagging behind the Japanese releases, but the idea is to close the gap. That said, Tales of Hearts R is arriving in Europe on PS Vita a year and a half after it was released in Japan on the system, and six years after its original release on Nintendo DS. The gap persists.

But we shouldn't be too upset about this. In a way it's great that at long last Bandai Namco is making up for lost time and we're getting the opportunity to play some of the best games the series has to offer (as was the case with the 3DS remake of Tales of the Abyss). During a time when the interest in JRPGs over here in Europe seems to have wained somewhat (a least it would appear that we are getting fewer games these days), it's nice to see an effort being made, even more so on a platform in need of great software like Sony's PS Vita.

Tales of Hearts R is a great title any way you look at it, and the only flaw we can find is in regards to its age. Originally, this title was meant for the portable market of 2008, and it came out prior to Vesperia, Graces, and both Xillia titles. Therefore the gameplay comes across as rather old-fashioned and it doesn't benefit from all the innovations and improvements made in the meantime. Instead the game walks hand in hand with the likes of Tales of Symphonia and Tales of the Abyss. This does not have to be, in itself, a bad thing, but it is true that it would have been great if they had introduced some of the improvements made later so as to avoid the feeling of a taking a step backwards with certain elements, such as the map of the world. The map is a classic one with plain textures, where everything is distant and you see a chunky avatar wandering around having random fights; very similar to those seen in the beginning of the Japanese RPG genre during the 16-bit and 32-bit generations. The animated cutscenes haven't aged well either, mainly because they retain the original resolution of the Nintendo DS, and the PS Vita is obviously capable of much more.

Anyway, if we ignore the elements that show the age of the game and forgive the delay in getting to Europe, Tales of Hearts R is a great game in other, crucial areas, notably when it comes to the narrative. Much like other entries in the series, the game starts with an easy enough plot in which Kor Meteor (the male protagonist) unintentionally shatters Kohaku's spiria (the female protagonist). The spiria is a crystal which contains all the emotions of a person, and this in turn is a central theme of the game. So, without it, Kohaku is merely a soulless puppet. However, the adventure of gathering pieces of Kohaku's broken spiria natually turns into a great quest to save the world, with a bunch of well-done and unexpected plot twists that had us captivated. The characters are quite charismatic, but in truth they are somewhat restricted too. They tend to stay within the box and they don't stray from the default roles that we have grown accustomed to. This holds them back, so while they are certainly nice acquaintances, they're not as memorable as some of those that starred in the genre greats.

The narrative is helped by the deep and fluid gameplay. The combat system (called "Aerial Chase Linear Motion Battle System" - because, let's be honest, that rolls off the tongue) is entertaining and dynamic, letting the player control characters directly and thus abilities that they want them to perform. In fact, the system is so much fun that it actually encourages you to grind, and it offers a lot of options when deciding the development of the characters, determining if we want them to become a specific class (tank, mage, support, etc.) or whether we have designs on them being more versatile.

Other than that the game sticks to the classic conventions of the genre: levelling up by killing hundreds of enemies, buying new weapons, using ability points on new skills for our heroes, exploring huge dungeons with puzzles, wandering all over the world by foot, epic struggles with bosses and so forth. It doesn't stray too far from the established path these respects.

Even if it has arrived late to the party, and although it's not the best chapter in the franchise (as we said before, this series doesn't really have one game that deserves that accolade, rather they're all of similarly high quality), we cannot deny that Tales of Hearts R is a great JRPG, and a sight for sore eyes when considering the slender catalogue of games available on PS Vita.

Tales of Hearts R is a lengthy game (the main adventure lasts for 30-40 hours, add to that side-quests), and it is also enjoyable, has plenty of dynamic moments, is full of surprises and, most importantly, leaves us with a smile on our face in the wake of its conclusion. It may not be innovative, and it may feel older than some of the more recent games in the series, but somehow it manages to work and stay relevant in 2014. What this game sets out to do, it does well.

Gamereactor UK
+
A long adventure with a lot of things to do, an entertaining and dynamic combat system, retains all the customisation options from the franchise.
-
It's six-year-old game and there are old-fashioned elements, low resolution animation sequences, and the characters are not very charismatic.
is our network score. What's yours? The network score is the average of every country's score

Tales of Hearts R gets a release date 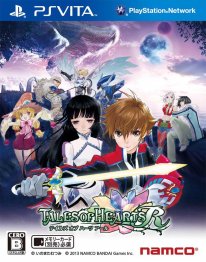