REVIEW. Written by Ingar Takanobu Hauge on the 8th of September 2021 at 15

The five-year long break has come to an end, and Tales of Arise rewards patient fans and newcomers alike with what might be the best game of the series.

The JRPG only released last week.

After a lengthy delay, we are finally able to check out the series' seventeenth entry.

PREVIEW. Written by Stefan Briesenick on the 10th of August 2021 at 15

You will be able to get hands-on with the combat system starting next week.

We've been longing for the new Tales of Arise for quite some time now, and during tonight's Summer Game Fest it was time for a new trailer to be shown. In this video, we...

Tales of Arise will come to PS5 and Xbox Series as well, launch date confirmed

It was previously known to be coming to PC, PS4, and Xbox One.

Bandai Namco has revealed that the upcoming RPG Tales of Arise has been delayed with no new release window set.

We also get to see more of Alphen and Shionne, who are brought together in this RPG despite their differences.

Alphen and Shionne offer very different perspectives, but both of them will need to team up in the newest Tales Of game.

Producer Yusuke Tomizawa talked to us about the series and Tales of Arise during our time in Los Angeles for E3.

We got our first peek at the stunning-looking RPG from Bandai Namco.

Screens and a few details land on Resetera, with the potential new Tales of title promising "classic gameplay mechanics". 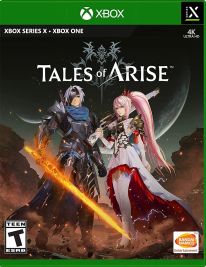